Computer Virus and its Types

A computer virus is a kind of malicious computer program, which when executed, replicates itself and inserts its own code. When the replication is done, this code infects the other files and program present on your system.

These computer viruses are present in various types and each of them can infect a device in a different manner.

In this article, we shall discuss in detail what is a computer virus and what are its different types. Also, we will read on to know what is an Anti-virus and how it can nullify a virus in our computer devices, along with some sample questions from the competitive exam point of view.

To know more about the Fundamentals of Computer, visit the linked article.

Apart from being aware of what a computer virus is, this topic is even important for candidates preparing for Government exams. Major competitive exams in the country comprise Computer Knowledge as an integral part of the syllabus and questions based on virus and anti-virus can also be expected in these exams.

Thus, to excel in the upcoming Govt exams, aspirants must go through this article in detail and carefully study the different types of viruses.

What is a Computer Virus?

A computer virus is a program which can harm our device and files and infect them for no further use. When a virus program is executed, it replicates itself by modifying other computer programs and instead enters its own coding. This code infects a file or program and if it spreads massively, it may ultimately result in crashing of the device.

Across the world, Computer viruses are a great issue of concern as they can cause billions of dollars’ worth harm to the economy each year. 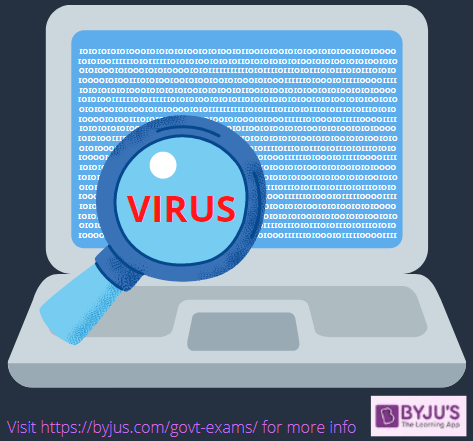 Since the computer virus only hits the programming of the device, it is not visible. But there are certain indications which can help you analyse that a device is virus-hit. Given below are such signs which may help you identify computer viruses:

The first thing which you might notice in case of virus attack is the speed with which your system shall process. And then gradually other changes can also be observed.

Discussed below are the different types of computer viruses:

Government exam aspirants can check the links given below for the detailed section-wise syllabus for the other subjects apart from Computer Awareness:

How To Protect Your Computer from Virus?

The most suitable way of making your computer virus-free is by installing an Anti-virus software. Such software help in removing the viruses from the device and can be installed in a computer via two means:

Further below, we bring to you details as to what anti-virus is and what are its different types along with a few examples.

Moving further, candidates can also refer to the following links to learn more about Computer Knowledge and prepare themselves accordingly:

What is an Anti-Virus?

An anti-virus is a software which comprises programs or set of programs which can detect and remove all the harmful and malicious software from your device. This anti-virus software is designed in a manner that they can search through the files in a computer and determine the files which are heavy or mildly infected by a virus.

Given below is a list of few of the major antivirus software which is most commonly used:

These are few of the many anti-virus software widely used to remove viruses from a device.

As discussed above, Computer Awareness is a common topic for major Government exams and questions based on Computer Virus and Antivirus may also be asked in the exam.

Thus, given below are a few sample computer virus questions and answers for the assistance of aspirants.

Q 1. Which of the following is not a type of computer virus?

Q 2. Which of these was the first computer virus?

Solution: Creeper was the first-ever computer virus and was an experimental self-replicating virus released in the year 1971.

Q 3. Which of the following is not a source of the virus entering your system?

Q 5. Which of the following viruses is also known as “Cavity Virus”?

For more questions to ace the upcoming competitive exams, aspirants can visit the articles given below:

Also, to get the best Preparation Strategy for Competitive exams, candidates can visit the linked article.

Get the latest exam information and study material at BYJU’S and keep yourself updated.

Frequently Asked Questions on Computer Virus and its Types

Q 1. What is the definition of a computer virus?

Ans. A computer virus is a kind of malicious computer program, which when executed, replicates itself and inserts its own code, which spreads a harmful virus in the system. This computer virus ultimately affects the functioning and programming of the device.

Q 2. What are the main computer viruses?

Ans. The main types of computer virus are as follows:

Q 3. What is the Creeper Virus?

Ans. Creeper virus was the first-ever computer virus that was released in the year 1971. Its creator was Bob Thomas.

Q 4. What are the examples of a computer virus?

Ans. Given below are a few examples of a computer virus:

Q 5. How to secure a computer system from a virus attack?

Ans. A computer device can be secured from a virus attack by installing an anti-virus in the system.