A computer network is a group of computers that use a set of common communication protocols over digital interconnections for the purpose of sharing resources located on or provided by the network nodes.

With respect to the Computer Knowledge section in the major Government exams conducted, the Computer Networking forms an extremely important topic and questions are frequently asked from this concept.

Candidates can also take the reference as to what this concept is all about through the video given below. This will enable candidates to get a more interactive interface to understand the topic and get a better analysis of the concept. 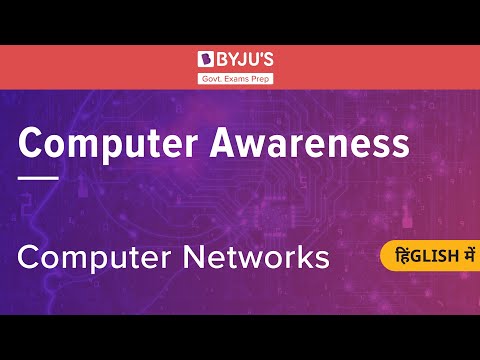 What is a Computer Network?

Before moving forward with the article and learning more about the types of computer networks, it is important for candidates to understand what is a network and how it affects the functioning of one or more computers connected with each other.

Definition – A group of computers which are connected to each other and follow similar usage protocols for the purpose of sharing information and having communications provided by the networking nodes is called a Computer Network.

A network may be small where it may include just one system or maybe as large as what one may want. The nodes may further be classified into various types. These include:

Networking can be classified into three types:

We shall discuss all three in detail further below in this article.

There are five main types of Computer  Networks:

For a few candidates understanding the different computer networking terms may be a bit tough and the same applies to other computer-related terminology, applications and software. So, to upgrade your Computer Awareness, refer to the difference between articles given below:

Given below are the eight types of Network Topologies:

Discussed below are a few important network devices from the exam point of view:

All the information given above will help candidates prepare themselves for the Computer Knowledge section in the upcoming Government exams and ace it.

It is also important to go through the topic of Computer Networks from the examination point of view. Computer Knowledge is included in the syllabus for all major competitive exams and can be one of the most scoring subjects as the questions asked are very basic and not much complex.

Thus, to assist candidates and help them understand the type of questions which may be asked from this concept, discussed below are a few question and answers based on Computer Network. Candidates can refer to these and start their preparation.

Q 1. Which of the following is not a type of network topology?

Q 2. The network device converts digital signals into analog signals and can be connected through a telephone is called _____

Q 3. Which of the following terms is related to sending data to a satellite?

Q 4. ______ topology is the simplest topology that connects two nodes directly together with a common link.

Q 5. Which is the shortest network covering network?

Q 6. When two or more topologies connect together, they are called ______

Q 8. _______ is a small hardware device which joins multiple computers together with a single LAN.

Q 9. A collection of various computers into a single coherent system, provided to a client, is called _______.

Q 10. A network which is constructed by using public wires to connect to a private network is called ______

All the questions given above are of a similar pattern followed in the competitive exams. Computer Network forms an important part from which questions may be asked in the final exam. Thus, preparing it well is extremely important.

Aspirants can also check the detailed Strategy for Competitive Exam Preparation at the linked article and start their preparation accordingly.

Also, for any further update, candidates can visit BYJU’S and get the latest information, study material and tips to prepare.