Key Differences Between Notepad and Wordpad

There is a marginal difference between Notepad and Wordpad. Although, by name, the two might seem similar but are different from each other. Both these programs are included in Microsoft Windows.

In this article, we bring to you a comparison between the differences between a Wordpad and a Notepad. This shall not only provide a general difference between the two and also, be helpful for competitive exam aspirants.

Computer Knowledge-based questions are included in the Science and Technology part of the IAS exam. Aspirants can visit the linked article and know more about the Indian Administrative Services. 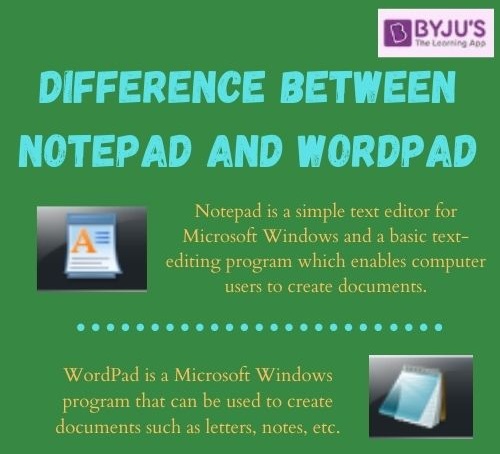 Notepad vs Wordpad – Comparison Between Notepad and Wordpad

Both Notepad and Wordpad were developed by Microsoft. A tabulated difference between notepad and Wordpad has been given below. This will give a clearer explanation as to how these two programs are different from each other.

The above-mentioned differences between Wordpad and Notepad imply that although both are used for working on text files, Notepad provides less formatting options in comparison to Wordpad.

Also, to learn about MS Word, its features, uses and points of difference from other text-based programs, candidates can visit the linked article.

Aspirants can check the difference between articles given below to get a comparative analysis of other common terms and programs related to Computer:

UPSC aspirants can also get 100+ difference between articles based on the multiple subjects which are included in the Civil Services exam syllabus at the linked article.

FAQ about Notepad and WordPad

What are the advantages and disadvantages of using WordPad?

Advantages – easy to use, low system-resource usage, speed. WordPad is well suited for taking notes, writing letters and stories, or for usage in various tablets, PCs, and smartphones. Disadvantages -WordPad is not a word processor and still lacks facilities like spell checker, grammar analysis function and does not support footnotes or endnotes. It is also a poor choice for editing HTML or working with configuration files, because it causes program errors or display issues on web pages.

Is WordPad better than Notepad?

WordPad is a word processing application that is more capable than a text editor like Notepad, and also has been around for many years (since Windows 95).

Since Computer Knowledge is also an integral part of the major competitive exams conducted in the country, candidates can visit the linked article to get the detailed syllabus for the computer section.

For the latest exam updates, study material and preparation tips for the upcoming competitive exams, aspirants can turn to BYJU’S for assistance.