Microsoft Windows is a group of several proprietary graphical operating system families, all of which are developed and marketed by Microsoft. Each family caters to a certain sector of the computing industry.

With the examination point of view, there are quite a few Government exams which include Computer Awareness as a part of their syllabus, and MS Windows is an important topic from that prospect.

To get the list of all major Government exams and information related to each of them, candidates can visit the linked article.

In this article, we shall discuss at length about the history and development of Windows along with all its versions till date, Windows operating system, applications and important commands.

Furthermore, candidates looking for more study material related to the Computer Awareness preparation, are advised to check the links given below:

Brief introduction about MS Windows has been given in the table below, candidates must refer to this information:

What is Windows Operating System?

By definition, an Operating System is a group of several GUIs (Graphical User Interface) families, all of which are developed, sold and marketed by Microsoft.

The latest version of Microsoft Operating System which is being widely used across the world is Windows 10.

For conceptual clarity and understanding the context well, candidates are advised to check out the video given below: 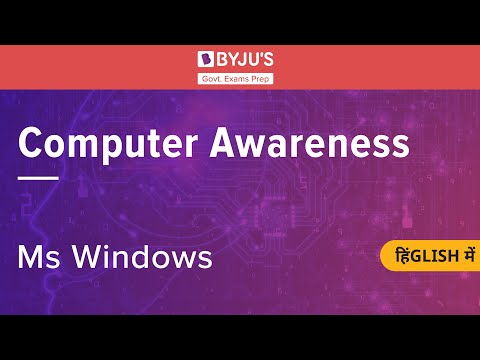 History and Development of Windows

It was 1983 when work on “Interface Manager” was started by Microsoft but it was in November 1995, when the first Windows 1.0 was introduced. Later on, with developments in technology, the requirement of the people and increased demand for Graphical User Interface, Microsoft kept releasing revised versions of Operating Systems.

The image given below shows the different Microsoft Operating Systems along with the year in which they were introduced: 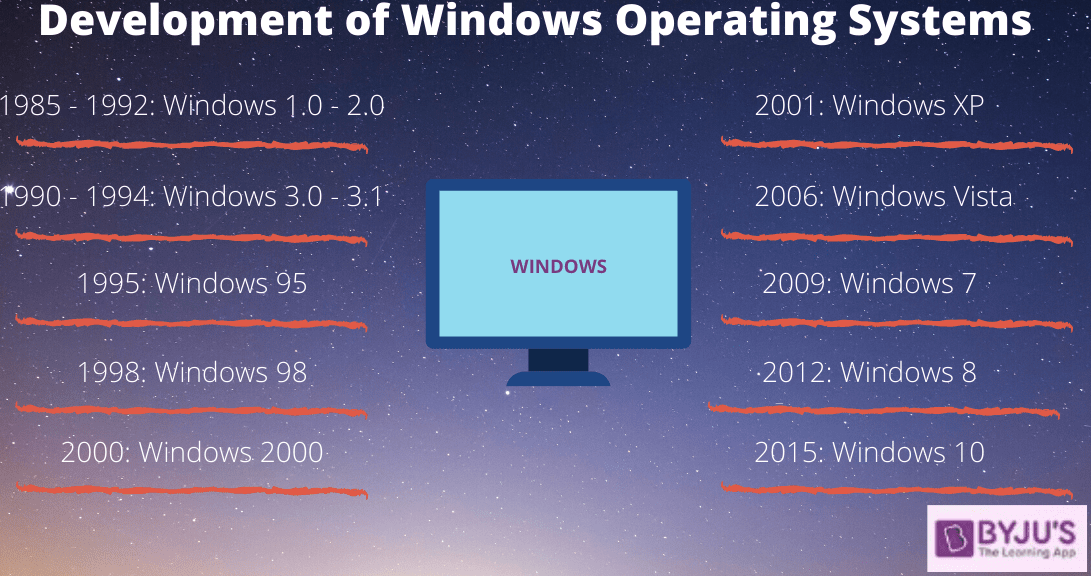 Let us understand the different versions of Windows Operating System along with the features of each of them individually.

Note* – None of the above mentioned Windows was Operating Systems. They all came under the category of Windows, working based on a graphical operating environment. It was Windows 95, which was the first Operating System released by Microsoft.

Candidates looking forward to preparing themselves for the upcoming competitive exams can check out the links given below and solve more and more questions to ace the examination:

There are all kinds of applications which are available at the Windows store and people can easily access them and download them for their personal or professional usage.

Given below is a list of such application available on Windows:

Aspirants must note that questions from Computer Knowledge may also be asked as a part of the General Awareness section. So, the preparation must be done accordingly.

Apart from the Computer Awareness section, there are various other sections which are a part of the competitive exam syllabus. Given below are the links for the same:

Since Computers run over a set of commands which are entered in the form of input, which with the advancement of Operating Systems can be entered through various Hardware devices.

Given below are a few important MS-DOS Windows commands for the reference of candidates:

Mostly the above-mentioned commands are not directly used by the user but are entered into the computer through a hardware device.

All the information given above in this article will help aspirants know more about the History and development of Windows and Operating System and questions from this topic may be asked in the upcoming examinations, so preparation must be done accordingly.

Candidates can also check the difference between hardware and software at the linked article.

Furthermore, there are various other difference between articles which will help candidates learn more about the different computer-based terms/programs/devices, etc. Given below are few such important links:

Computer Knowledge is an integral part of the exam syllabus for various Government sector jobs. It is important for candidates to have an idea to the type of questions which may be asked in this section.

Thus, given below are a few sample questions based on Microsoft Windows, in the same format as asked in various competitive exams. Aspirants can refer to these and apprehend the question pattern and types.

Q 1. In which year was Windows 8 released?

Q 3. What is the maximum size of a word document created in Windows?

Q 4. What are the total number of function keys on a keyboard?

Q 5. Which of the following does not have a start button?

All these questions are for reference purpose. Candidates must be well prepared to excel in this section as though the questions are basic, they may be confusing.

To get a proper Preparation Strategy for Competitive Exams, aspirants can visit the linked article.

For any further information related to the competitive exams 2021, candidates can get all the required assistance at BYJU’S.