The Internet is the most commonly used term in today’s world and plays a very important role in the everyday life of people. But there are many questions, answers to which people need to know. In this article, we shall help you find answers to these questions; discuss the evolution of the Internet, its usage, benefits, history and how the Internet works.

In terms of Computer Awareness, the Internet is one of the most important topics in competitive exams. Thus, candidates preparing for exams like Banking, Insurance, SSC, etc. must read on to learn more about the Internet.

For other important terms and software involved with Computer, candidates can check the Computer Knowledge page.

Let us first answer a few of the most important questions which arise with regard to the Internet.

Question: What is the Internet?

Answer: A global system of interconnected computers, using a standardised Internet Protocol suite for communication and sharing information is called the Internet.

Question: What is ISP?

Answer: ISP stands for Internet Service Provider. This helps in providing direct access for using the internet from your office or home, connected through landlines. With the introduction of Wi-fi and broadband, connecting to the Internet has become wireless.

Question: What is the World Wide Web?

Answer: World Wide Web or ‘www’ is a collection of webpages which can easily be published on the Internet and read by millions of its users. To know the difference between World Wide Web (www) and Internet, candidates can visit the linked article.

Question: What is an IP address?

Answer: The Internet Protocol address is a numerical identification code assigned for any device connected to a network. It acts as an identification interface for Internet users.

Question: What is a Web Browser?

Answer: A web browser is a software application for accessing the information on the World Wide Web. The commonly used web browsers include Google Chrome, Internet Explorer, Mozilla Firefox, etc.

Learn more about the other Computer related terms with the help of links given below:

History and Evolution of the Internet

The Internet completely revolutionised communication and technology across the Globe. Initially, computerised devices were only used for large industries but later its usage increased massively.

It is also mandatory for people to know that it is not possible for a single person to develop something as broad and wide as the Internet all by himself/herself. It was a combined effort of multiple researchers and programmers that the Internet was discovered.

Given below are a few important points which played an extremely important role in the development of the Internet and making it one of the most widely used resources across the world.

Amid all these developments which were made, a lot of successes and failures came in but today, the Internet is one such commodity which has made lives easier and brought in a wider pace for development across the globe.

Since Computer Awareness is an important topic from the Government examination point of view, candidates can get a more understandable explanation of the Internet and its various aspects by reviewing the video given below: 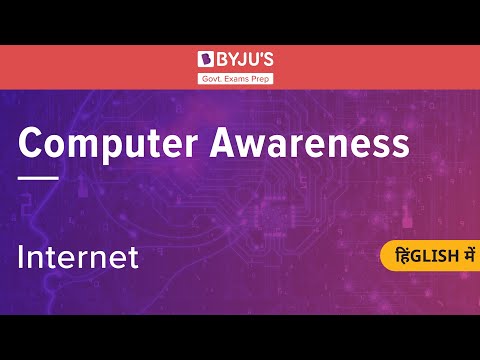 Ways To Connect To Internet

The different ways in which one can connect to the Internet are discussed below in brief:

Aspirants for Government exams can check the links given below and practise more and more questions from the different sections and topics which are included in the competitive exam syllabus:

Protocols are a set of rules that help in governing the way in which any particular body or technology works.

Internet Connection Protocols can be divided into three major types:

Internet forms an integral part of computer usage today and is an important topic to be well prepared for govt exams. Given below are links to other such important subjects which are a part of the syllabus:

Pros and Cons of Using the Internet

Intentionally or unintentionally, Internet usage is a part in the day to day lives of every individual. The Internet has made lives easy and comfortable, but at the same time made human being dependable for the smallest or biggest of information. Discussed below are the uses of the internet, along with a few cons that it brings along.

With the Internet being an extremely essential part of daily life, it is important that a person is well aware of the disadvantages of the Internet and its excess usage.

All the information provided in this article regarding the Internet will bring in a broader perspective of connectivity, networks and protocols which are necessary for Internet usage.

Analysing and studying the information given here shall prove to be highly useful for people belonging to all age groups.

Given below are a few difference between articles which will help candidates understand the different computer-based terms and applications even better:

Given below are a few sample questions on Internet. A similar type of questions may be asked in the Computer Knowledge section from this topic in the upcoming competitive exams.

Q 1. A unit of data made into a single package that travels along a given network path is called ________.

Q 3. What is the traditional technology used for connecting devices in a WAN, LAN and MAN, enabling them to communicate with each other via a protocol?

Q 6. Which was the first host-to-host network connection?

A similar type of questions may be asked based on the Internet in the upcoming competitive exams.

Government exam aspirants can also check the Preparation Strategy for Competitive Exams at the linked article and proceed with their preparation accordingly.

For study material on any other topic, candidates can turn to BYJU’S and get the latest exam information, preparation tips and other relevant information.

Ans. Internet is an electronic communications network that connects computer networks and organizational computer facilities around the world.

Q 2. What is the importance of the Internet?

Ans. Internet has various benefits. It has simplified communication, helped people know about the activities and news across the globe, it has provided easy access to every kind of information. The Internet has also become a source of expanding business, learning new things, and gaining more knowledge.

Q 3. What are the different types of Internet?

Ans. Given below are different types of Internet connections:

Q 4. What are the features of Internet?

Ans. The basic feature of the Internet is to help its users find any information, based on any topic easily and have free access to the data.

Q 5. Is there a disadvantage of using Internet?

Ans. The Internet does have multiple cons. It can be distracting and time-consuming, can be used for wrong practices like retrieving personal data. It has also increased human dependency on technology for the smallest activities.