The syllogism is an integral part of all the aptitude questions papers. It falls under the category of logical reasoning. Over the years syllogisms have achieved an important place in the aptitude exams, due to its mystifying nature.

For most Government exams, the topic of syllogism is very common, and questions are most definitely asked in the exam, as seen in the past few years. Thus, understanding the concept well is extremely important.

It is advised to solve the question of the syllogism as the last question of attempt as it requires a lot of patience and logical level of analysis. Following is the list of exams where the questions of syllogisms are frequent.

An interactive explanation may help candidates analyse and understand the concept even better. Thus, candidates can check the detailed explanation of the concept of syllogism along with a few simple tips to answer questions in the video given below: 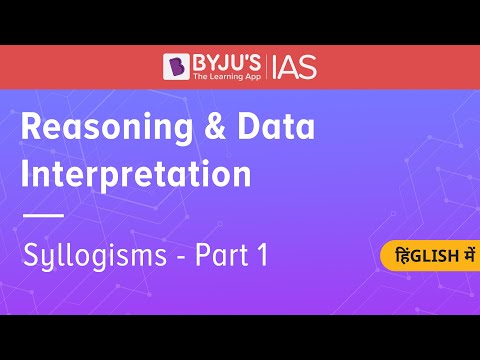 The word syllogism is derived from the Greek word “syllogismos” which means “conclusion, inference”. Syllogisms are a logical argument of statements using deductive reasoning to arrive at a conclusion. The major contribution to the filed of syllogisms is attributed to Aristotle.

There are many ways of solving questions of syllogisms. The most effective and efficient method of all is using a Venn diagram. Based on the given statements, one should draw all the possible diagrams and then solve each of these diagrams separately. Finally, the answer common to all the diagrams is taken as the correct one.

The questions of syllogisms of three main parts.

The central premise is a statement in general, believed to be true by the author.

Example: All women are smart.

The minor premise is a specific example of the major premise.

Example: Amanda is a woman.

The conclusion is a specific statement which logically follows both major and minor statement.

To identify whether the given conclusion is correct or not draw the Venn diagrams according to major and minor statements. 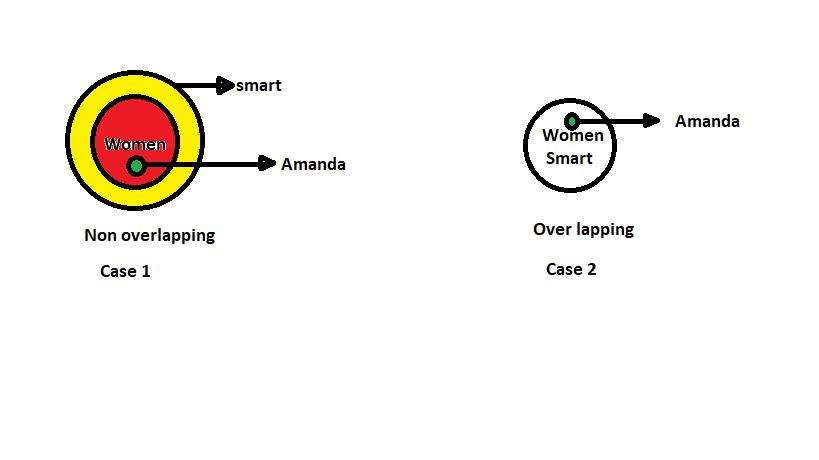 Note: The conclusion should be true according to all the possible cases. One should draw all possible cases before arriving at a conclusion. Below the table that provides that correct combination of Venn diagrams of major and minor premises.

The following table gives the correct representation of Venn diagrams applying the above rules.

Instructions: Observe the following statements and select if the conclusion is

Major premise: All Actors are right-handed.

Minor premise: All right-handed are Artists.

The conclusion is: Some Artists are Actors.

The Venn diagram of actors is inside right-handed and which in turn is inside the Venn of artists. According to the diagram, the portion of the red Venn diagram overlapping with green indicates that some actors artist are actors. Hence the conclusion is correct according to this diagram, but can not be concluded as the final answer until the second case is checked. 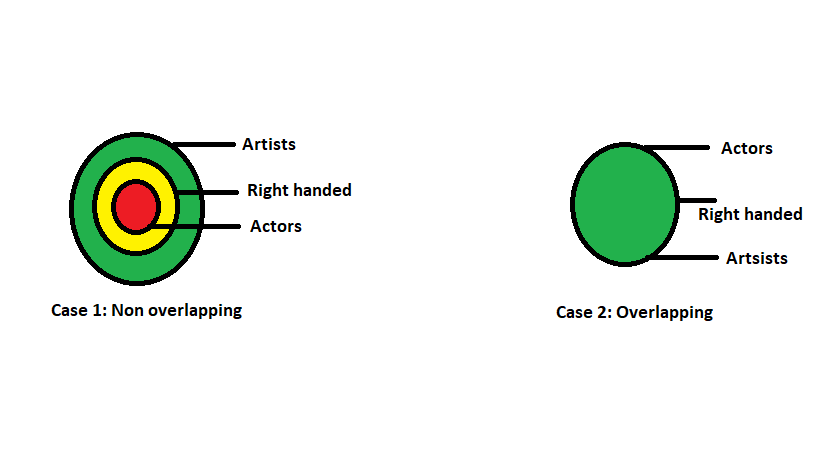 Instructions: Observe the following premises and select if the conclusion is

Major premise: No pencil is cloth.

Minor premise: No sweaters are pencils.

The conclusion is: All sweaters are cloth

In this case, as can be seen, there are three possible scenarios.

Since “ No pencil is cloth” The diagram of pencil and cloth do not have any overlapping. Hence, they are just touching each other( the diagram can also be represented by keeping them apart, but that will not affect the logical conclusion). According to the minor premise, since no sweaters are pencils, the diagrams of sweaters and pencil do not overlap.

Case 1: If no sweaters are pencil, one possibility is there can be no sweater which is no cloth also.

Case 2: There can be a sweater which is also cloth. Hence a part of sweater and cloth overlap with each other.

Case 3: All clothes can be a sweater, as there is not any promise which says this combination is not possible.

The conclusion “all sweaters are cloths” is correct only according to 3rd case but not with respect to the 1st and 2nd case. Hence the conclusion is incorrect. 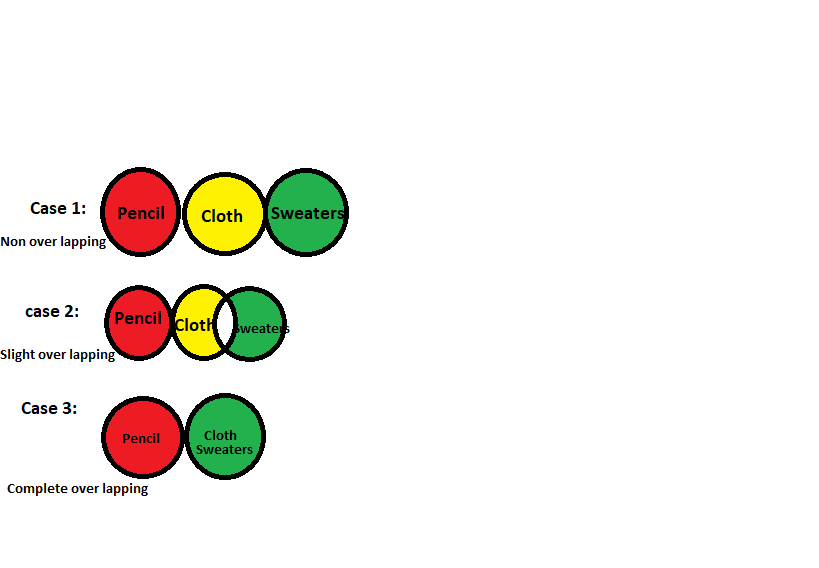 For questions from the various other topics under the reasoning ability section, candidates can visit the Logical Reasoning Questions page.

Observe the following premises and select the correct conclusion.

Major premise: All engineers are innovative.

Minor premise: All students are engineers. 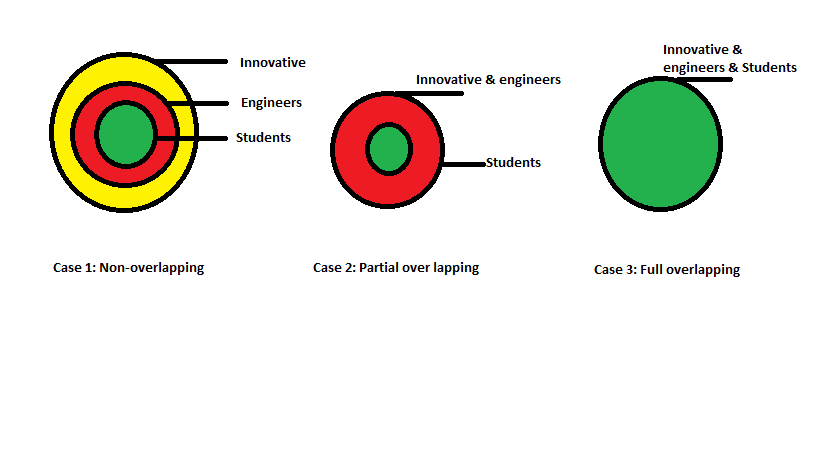 Major premise: No computers are televisions.

Minor premise: All radios are televisions. 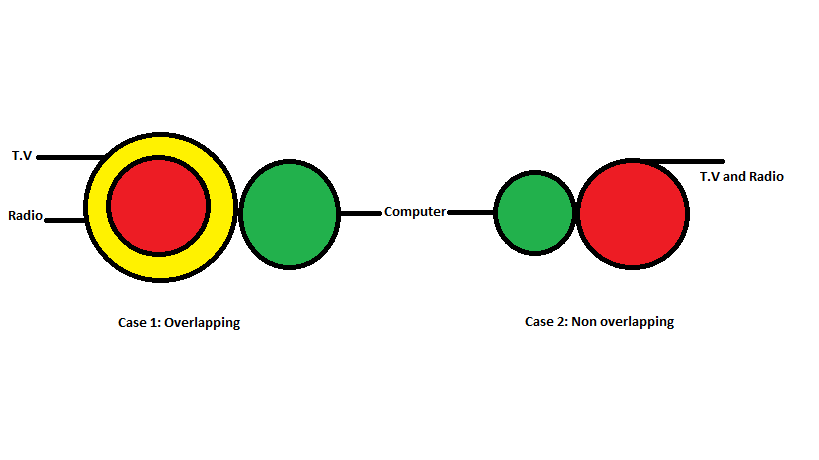 The first conclusion “Some hammers are stones” is not true according to case 5, where all the shammers are stones. The second conclusion” Some windows are rings “ is true in all the three cases. Hence the correct answer option is B.

All cups are books.

All books are shirts.

i. Some cups are not shirts.

ii. Some shirts are cups. 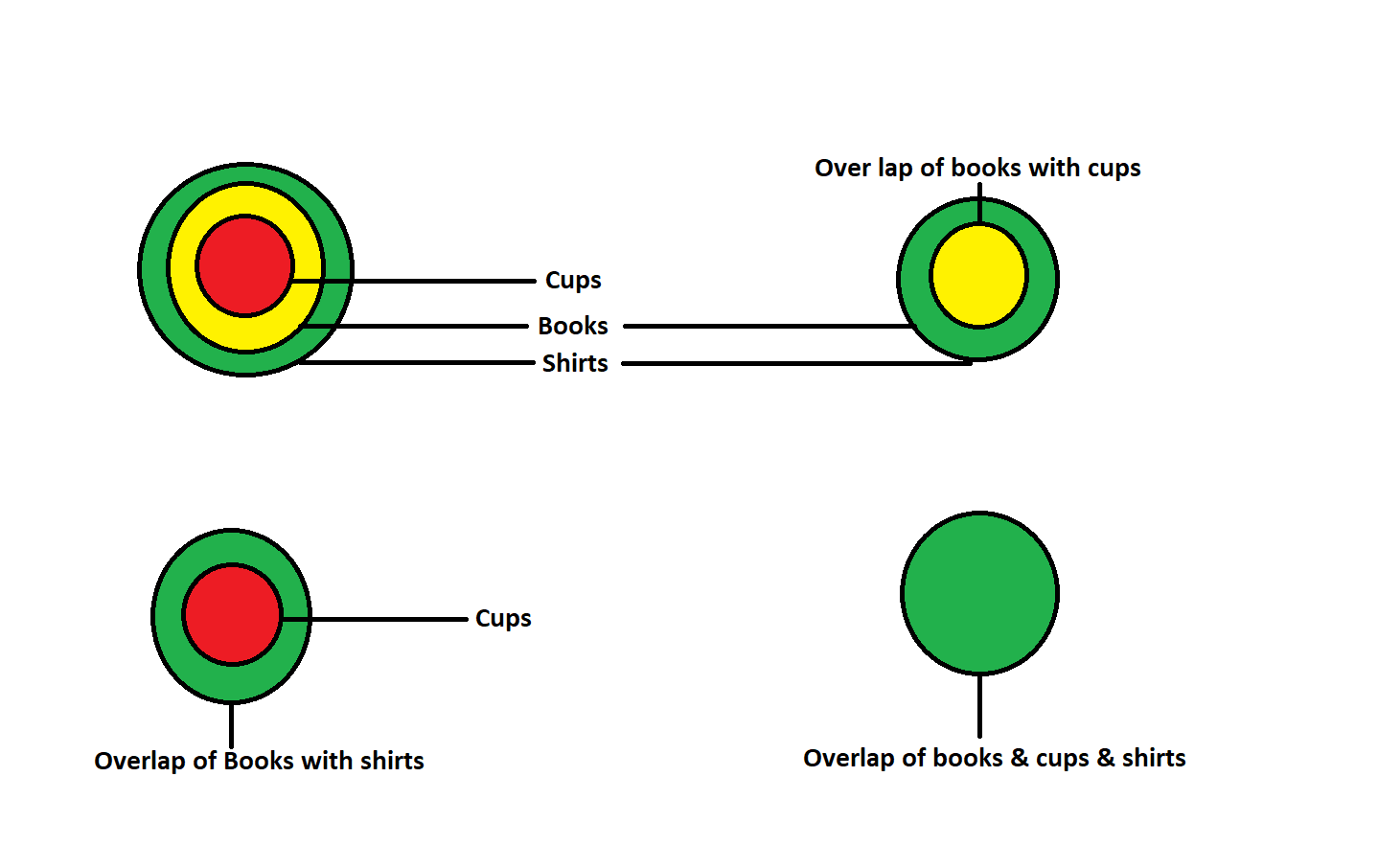 Four combinations of Venn diagrams are possible according to the two premises. The first conclusion “some cups are not shirts” is not true in all the three cases, as all the cups are shirts in every case. The second conclusion “ some shorts are cups” is true only in the first three cases, whereas in the last case it’s not true(all the shirts are cups). Hence neither conclusion 1 nor 2 is correct. Hence the correct answer is option D.

Interested candidates can get more questions based on this concept on the Syllogism Questions page.

The logical reasoning part can be the most scoring part in almost all major Government exams and candidates must ensure that they practise more to score better in the final exams.

Aspirants can refer to BYJU’S for any further assistance.

Further analysis of the concept has been given in the video below: 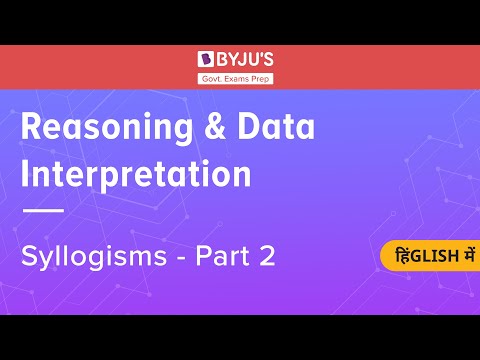