What is Subtraction? How to Subtract Numbers? (Methods, Rules & Examples) - BYJUS

Subtraction is the process of taking away objects from a group of objects. It is one of the four basic operations in mathematics. When we subtract a number from another, we get the difference between the two numbers. This difference is always smaller than the bigger number of the two numbers that were involved in the subtraction. We use a minus (-) sign to denote subtraction. Learning subtraction will help us solve many day-to-day problems easily....Read MoreRead Less

Subtraction means taking away from a group of objects or numbers. When we subtract, the number of things in the group reduces. In subtraction problems, a minus (-) symbol is used to perform this mathematical operation.

The following are some common terms in subtraction you will come across: (subtraction strategies) 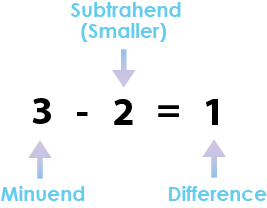 Here is a fun fact that will help you remember subtraction more clearly:

Example 1: You have 5 pies. You give 2 pies to your friend. How many pies are you left with?

Now, subtract to find the difference.

Therefore, you are left with 3 pies.

Example 2: You have 6 berries and you eat 2 of them. How many berries are you left with?

Solution: That means you are left with 4 berries.

Example 3: There are 10 baseball bats in a shop. The shopkeeper sells all the 10 bats. How many bats are left in his shop?

Solution: Form the subtraction equation for this problem.

This will be equal to zero as the shopkeeper had only 10 bats and all of them were sold.

Hence, the shopkeeper has no bats or 0 bats. If you remember, a number subtracted by itself will result in 0.

That means there won’t be any baseball bats left in the shop.

Example 4: Joseph has 5 balloons. Ginny has 3 balloons. How many more balloons does Joseph have?

The answer is that Joseph has 2 more balloons.

Solution: We can use counters to find the difference. 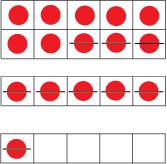 Example 6: Richard bought 6 shirts for himself. His younger brother, Jake, asked him for a few shirts, but Richard didn’t give him any. How many shirts does Richard have now?

The subtraction equation for this problem is 6 – 0.

This will be equal to 6 itself as the value of zero equals nothing, and when you subtract zero from any number, you get the number itself as the answer.

So, Richard has 6 shirts for himself.

Example 7: Betty bought 4 balloons. As she started walking back home, one of them burst. Betty started crying, but her sister consoled her, saying she still had some balloons remaining. How many balloons does Betty have now?

What are some interesting facts about subtraction?

Here are some facts about subtraction that will  solidify your knowledge of math skills.

First, draw a number line and start from the number 6.

Now, to subtract 2, move to the left of the number line twice.

What are the “minuend” and the “subtrahend”?

In a subtraction equation, the minuend is the first and larger number from which you take away, while the subtrahend is the smaller number after the minus (-) symbol that is being subtracted.