Difference between History and Civics

Difference between History and Civics is explained here in detail. Civic education is the study of the theoretical, political and practical aspects of citizenship. History is an umbrella term that relates to past events as well as the memory, discovery, collection, organization, presentation, and interpretation of information about these events. The difference between History vs Civics given here can help the UPSC Civil Service exam aspirants to understand the basics better and know their comparisons thoroughly. 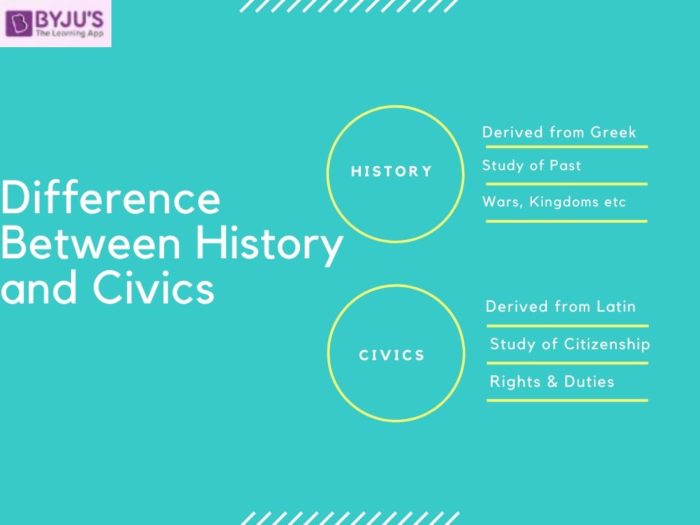 The major difference between History and Civics are:

These are the main differences between History and Civics.The differences given in the above table can help the UPSC Civil Service Exam aspirants to answer any related questions easily in the exams.

After learning about the History and Civics difference, diligently refer to the NCERT Notes on History of Ancient India, Medieval India and Modern India. In addition refer to the Indian Polity Notes. It is better to know the syllabus, book list and strategies that can be implemented for the Public Administration and Political Science Optionals for UPSC Exam. Visit the below-given links to learn about the Strategy for Political Science and Public Administration Optional subjects, also refer to the important Notes on Ancient, Medieval, and Modern India in detail along with other information.

Who is known as the father of civics?

Benjamin Franklin is the earliest model of the civic scientist in America. He acknowledged the complexity of cross-cultural, diverse and anticipatory interactions. Thus he is regarded as the father of Civics.

What is the importance of studying civics?