Difference between Magistrate and Judge 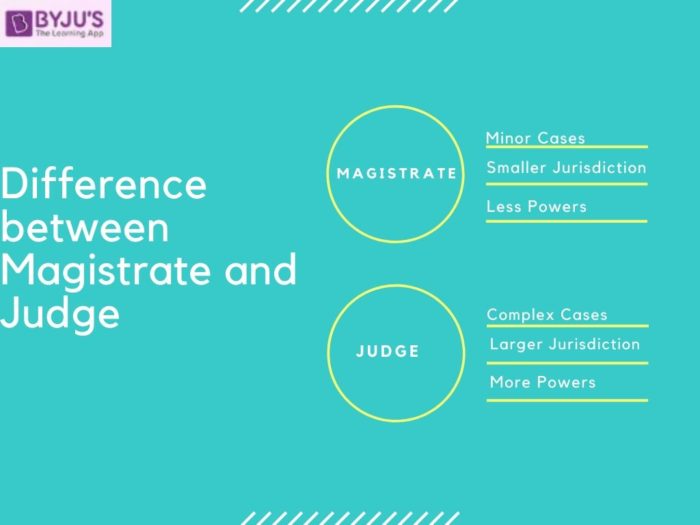 The major differences between Magistrate and Judge in India are:

To know more about the hierarchy of courts and judicial magistrates in India with diagrams, please click on the article, Indian Judiciary.

These are the main differences between Magistrate and Judge in India. The differences given in the above table can help the UPSC Civil Service Exam aspirants to answer any related questions easily in the exams.

After learning about the Magistrate and Judge difference, it is better to know the details of Indian Penal Code – its history, structure, recent developments; 25 most important Supreme Court judgements including Kesavananda Bharati case, Minerva Case; Malimath Committee, Criminal Courts – Definition, Structure of the Bench, and Regulations; Indian Judiciary – Supreme Court, High Court, District and Subordinate Courts, Law Commission of India, Appointment and Removal of Supreme Court Judges, Uniform Civil Code, and Judicial Overreach in India, along with examples very thoroughly. Visit the below-given links to learn about Indian Penal Code, Indian Judiciary and host of other information related to Laws of India, in detail along with other information.

Frequently Asked Questions on Difference between Magistrate and Judge

Q 1. Who between a Judge and Magistrate has more powers?

Ans. Between a Judge and a Magistrate, the Judge has more powers. Even the Jurisdiction of a Judge is very vast in comparison to that of a Magistrate.

Q 2. How is a Judge and a Magistrate appointed?