Uniform Civil Code resonates with one country one rule, to be applied to all religious communities. The term, ‘Uniform Civil Code’ is explicitly mentioned in Part 4, Article 44 of the Indian Constitution. Article 44 says, “The State shall endeavor to secure for the citizens a uniform civil code throughout the territory of India.”

Context: Uniform Civil Code in India is a widely debated topic lately since the first petition was filed in 2019 to seek for framing of a UCC to promote national integration and gender justice, equality, and dignity of women.

Questions from it can be asked in the IAS Exam in Prelims, Mains GS-1 (Indian Society), GS-II (Governance), and also Essay papers. This article is an essay on the Uniform Civil Code in India. It talks about the challenges and suggestions in its implementation, part IV of Article 44 of the constitution and debates associated with uniform civil code. 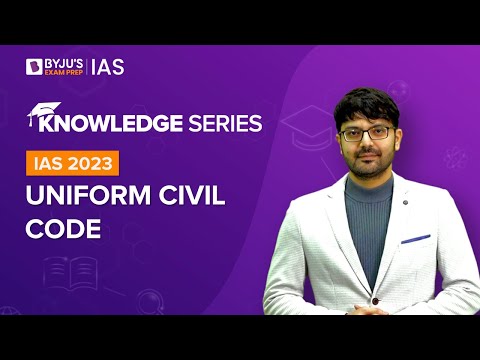 A Uniform Civil Code means that all sections of the society irrespective of their religion shall be treated equally according to a national civil code, which shall be applicable to all uniformly.

They cover areas like- Marriage, divorce, maintenance, inheritance, adoption and succession of the property. It is based on the premise that there is no connection between religion and law in modern civilization.

Article 44 corresponds with Directive Principles of State Policy stating that State shall endeavour to provide for its citizens a uniform civil code (UCC) throughout the territory of India.

Historical perspective – The debate for a uniform civil code dates back to the colonial period in India.

So while criminal laws were codified and became common for the whole country, personal laws continue to be governed by separate codes for different communities.

Some of the reforms of this period were:-

The Hindu code bill -The bill was drafted by Dr.B R Ambedkar to reform Hindu laws, which legalized divorce, opposed polygamy, gave rights of inheritance to daughters. Amidst intense opposition of the code, a diluted version was passed via four different laws.

Succession Act-The Hindu Succession Act, 1956, originally did not give daughters inheritance rights in ancestral property. They could only ask for a right to sustenance from a joint Hindu family. But this disparity was removed by an amendment to the Act on September 9, 2005

A 73-year-old woman called Shah Bano was divorced by her husband using triple talaq (saying “I divorce thee” three times) and was denied maintenance. She approached the courts and the District Court and the High Court ruled in her favour. This led to her husband appealing to the Supreme Court saying that he had fulfilled all his obligations under Islamic law.

The Supreme Court ruled in her favour in 1985 under the “maintenance of wives, children and parents” provision (Section 125) of the All India Criminal Code, which applied to all citizens irrespective of religion. Further, It recommended that a uniform civil code be set up.

Facts about the case:

Impact – After this historic decision, nationwide discussions, meetings and agitations were held. The then government under pressure passed The Muslim Women’s (Right to protection on divorce ) Act (MWA) in 1986, which made Section 125 of the Criminal Procedure Code inapplicable to Muslim women.

Muslim Women’s Act (MWA) was challenged on the grounds that it violated the right to equality under Articles 14& 15 as well as the right to life under Article 21. The Supreme Court while holding the law as constitutional, harmonised it with section 125 of CrPC and held that the amount received by a wife during iddat period should be large enough to maintain her during iddat as well as provide for her future. Thus under the law of the land, a divorced Muslim woman is entitled to the provision of maintenance for a lifetime or until she is remarried.

In this case, the question was whether a Hindu husband married under the Hindu law, by embracing Islam, can solemnise a second marriage. The court held that the Hindu marriage solemnized under Hindu law can only be dissolved on any of the grounds specified under the Hindu Marriage Act 1955. Conversion to Islam and marrying again, would not by itself dissolve the Hindu marriage under the act and thus, a second marriage solemnized after converting to Islam would be an offence under section 494 of the Indian Penal Code(IPC).

In this case, a priest from Kerala, John Vallamattom challenged the Constitutional validity of Section 118 of the Indian Succession Act, which is applicable for non-Hindus in India. Mr Vallamatton contended that Section 118 of the act was discriminatory against Christians as it imposes unreasonable restrictions on their donation of property for religious or charitable purposes by will. The bench struck down the section as unconstitutional.

Candidates who are preparing for UPSC 2023, may check the linked article to know more about the upcoming IAS exam, its pattern, syllabus and more.

The Constitution of India on the Uniform Civil Code

Part IV, Article 44 of the Constitution states that “The State shall endeavour to secure the citizen a Uniform Civil Code throughout the territory of India”.

However, Article 37 of the Constitution itself makes it clear the DPSP “shall not be enforceable by any court”. Nevertheless, they are “fundamental in the governance of the country”. This indicates that although our constitution itself believes that a Uniform Civil Code should be implemented in some manner, it does not make this implementation mandatory.

The candidates can read IAS Topper strategies to align their preparation accordingly and be updated with tips and guidelines.

Other constitutional provisions relating to religious freedom and secularism are:

The 42nd Constitutional Amendment Act inserted the word ‘secularism’ in the preamble. In the S.R.Bommai vs Union of India case, the Supreme Court held secularism as a basic feature of the constitution.

Goa is the only Indian state to have a UCC in the form of common family law. The Portuguese Civil Code that remains in force even today was introduced in the 19th century in Goa and wasn’t replaced after its liberation.

However, the code has certain drawbacks and is not strictly a uniform code. For example, Hindu men have the right to bigamy under specific circumstances mentioned in Codes of Usages and Customs of Gentile Hindus of Goa (if the wife fails to deliver a child by the age of 25, or if she fails to deliver a male child by the age of 30). For other communities, the law prohibits polygamy.

Uniform Civil Code and Arguments For & Against

Arguments in favour of the Uniform Civil Code: UCC is a debated-topic and forms an important part of UPSC Current Affairs which aspirants can check in the linked article.

The task of actually devising a set of rules that will govern all communities is a very formidable and tedious one considering the vast range of interests and sentiments to be accounted for.

Opponents of UCC argue that personal laws are derived from religious beliefs. They maintain that it is prudent not to disturb them, as this runs the risk of engendering a great deal of animosity and tension between various religious communities. Also, India being a secular country guarantees its minorities the right to follow their own religion, culture and customs under Article 29 and 30. They argue that implementing UCC will contravene these articles.

To realize the goals of the DPSP and to maintain the uniformity of laws, the following suggestions need immediate consideration:

India has a unique blend of codified personal laws of Hindus, Muslims, Christians, Parsis. There exists no uniform family-related law in a single statute book for all Indians which is acceptable to all religious communities who co-exist in India. However, a majority of them believe that UCC is definitely desirable and would go a long way in strengthening and consolidating the Indian nationhood. The differences of opinion are on its timing and the manner in which it should be realized.

Instead of using it as an emotive issue to gain political advantage, political and intellectual leaders should try to evolve a consensus. The question is not of minority protection, or even of national unity, it is simply one of treating each human person with dignity, something which personal laws have so far failed to do.

How to Approach UCC for Civil Services Examination

Aspirants can get GS-II related articles from the table below:

Sample questions are given below:

UPSC aspirants should read more about various laws and constitutional amendments for IAS 2023. It would be beneficial to refer to NCERT Books on the subject. The concepts learnt should be linked to current affairs for the exam.

What is the meaning of Civil Code?

A civil code is a systematic collection of laws designed to deal with the core areas of private law such as for dealing with business and negligence lawsuits and practices.

Why does Goa have a uniform civil code?

The Goa Civil Code, also known as the Goa Family Law, was introduced in 1870 by the Portuguese who were ruling the state. After the liberation of Goa in 1961, the civil code was retained.

When was the Hindu code bill passed?

The Hindu Code Bills are a set of laws that were passed in the 1950s.

You can also check the articles relevant to UPSC IAS exam preparation in the table below: