The Generalized System of Preferences or the GSP is a preferential tariff system that developed countries extend to developing countries. This topic features regularly in the news and is important for the UPSC exam economy and international relations segments. 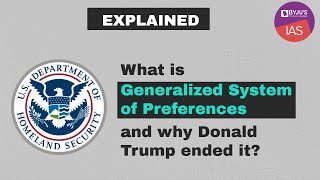 GSP was instituted by the UNCTAD in 1971. The 13 countries that provide GSP preferences to emerging and developing countries are:

The motive behind granting GSPs is to help developing countries and particularly least developed countries (LDCs) to promote productive capacity development and to encourage trade and investment.

Under the normal trade arrangement, countries must give equal preferences to trade partners. This is called the Most Favoured Nation (MFN) clause. As per the MFN, no country should be favoured or discriminated against in trade. At the same time, the WTO allows an exemption for the MFN, like the GSP awarded for developing and least developed countries.

How did the US’s withdrawal of GSP affected India?

The USA withdrew the GSP preference to India with effect from June 2019.

In fact, the US is on the way to completely phase out the GSP arrangement. Already, as of 2018, GSP for 94 products (chiefly handicraft and agricultural products) has been withdrawn for all beneficiary countries.

Out of the 94 products for which GSP has been withdrawn, India exports almost 50 products. India will be affected because the country had enjoyed preferential tariffs on exports worth almost USD 5.6 billion (under the GSP route out of a total export valued at USD 48 billion in 2017-18). Under the GSP, India exported almost 1937 products to the US.

However, according to some sources, 90% of Indian exports to the US is under the normal route, and hence will not be affected by the withdrawal of GSP.

With President Biden taking over the reigns in 2021, it is expected that India-USA ties will improve along with the restoration of the Generalized System of Preferences. There was an indication that restoring the GSP system was on the top of a list of priorities as per the statement made by United States Representative for Trade Katherine C Tai

UPSC Questions related to the Generalized System of Preferences

What is meant by the Generalized System of Preferences?

It is a preferential tariff arrangement granted by the developed countries to a few beneficiary countries (developing countries and LDCs) to promote economic growth in those countries.

What are GSP countries?

13 countries grant GSPs, the list is given above in the article.

What is the purpose of GSP?

The objective of the GSP is to promote monetary prosperity in the beneficiary countries.

Is India a GSP country?

The USA removed India from the list of countries receiving GSP treatment as of June 2019.