The Mamluk Dynasty ruled over Delhi in the 13th century CE and was directed to Norther India by Qutb ud-Din Aibak. Mamluk was a powerful military class a soldier of slave origin who converted to Islam.

This dynasty was among the first few dynasties to rule as the Delhi Sultanate. In this article, candidates can get NCERT notes on the Slave Dynasty, which was an integral part of medieval Indian history. All IAS exam aspirants must go through the notes provided further below in this article for prelims and mains exam preparation.

Also, aspirants can get the list of important Mughal Emperors at the linked article.

Mamluk Dynasty came to an end when the last ruler  Muiz-ud-din Muhammad Qaiqabad was thrown out of the rule by Khilji ruler Jalal ud din Firuz Khalji.

Refer to the video below and get in-depth information about the Mamluk Dynasty from experts: 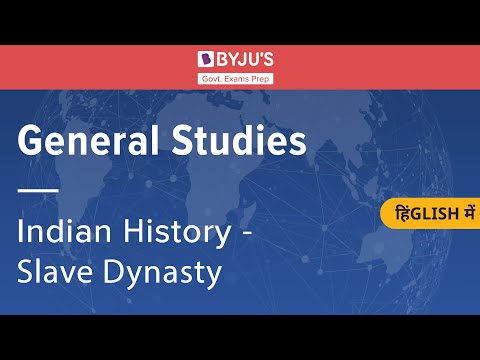 The reason behind the decline of the Mamluk Dynasty

The major reasons associated with the decline of the Mamluk dynasty are:

It was around 1516-17 when the Ottomans had defeated Mamluks and began to revert to the status of provinces within an empire in Egypt. The Mamluk Sultanate was ultimately destroyed, however, Mamluks remained a class of influence among the people of Egypt for some more time.
Related Links:

Who was the first sultan of the Mamluk Dynasty in India?

The first Sultan of the Mamluk dynasty was Qutb ud-Din Aibak, who had the titular name of Sultan and reigned from 1206 to 1210.

Who were the Mamluks?

The Mamluks were a class of warrior-enslaved people, mostly of Turkic or Caucasian ethnicity, who served between the 9th and 19th century in the Islamic world. Despite their origins as enslaved people, the Mamluks often had higher social standing than free-born people.

Why was it called the Mamluk Dynasty?

The literal meaning of “Mamluk” is “owned”, and the Sultans of this Dynasty were either the earliest known slaves or were sons of the former slaves. This led to naming this dynasty as the Slave or Mamluk Dynasty.

Who ruled Egypt before the Ottomans?

The Mamluks seized power over Egypt in around 1250 AD. They established their Sultanate in Egypt until 1518, when the Ottomans took control of the country.

Who were the most famous Sultans of the Mamluk Dynasty?

Qutb ud-Din Aibak, Iltutmish, Razia Sultan, and Ghiyas ud din Balban were a few of the most famous Mamluk Sultans.