To know more about the IAS exam, check the linked article. 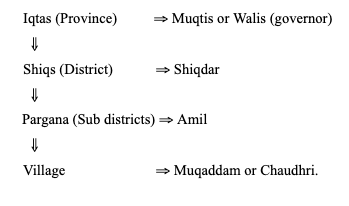 For more UPSC notes on Medieval History, check the link.

There were hardly any changes in the structure of the Hindu society during the Delhi Sultanate. The Brahmins continued to enjoy the highest place in the social strata. The severest restrictions were placed on mingling with the chandalas and other outcasts. During this period, the practice of keeping women in seclusion and asking them to veil their faces in the presence of outsiders (purdah system) became prevalent among the upper-class Hindus (particularly in North India). The Arabs and Turks brought the purdah system into India and it became a symbol of the higher classes in society. The practice of sati was widely prevalent in different regions of the country. Ibn Batuta mentions that permission from the Sultan had to be taken for the performance of sati.

During the Sultanate period, the Muslim society remained divided into ethnic and racial groups. The Afghans, Iranians, Turks and Indian Muslims developed as exclusive groups and rarely married each other. Converts from the lower sections of Hindus were also discriminated against.

For the Hindu subjects, from the time of the Arab invasion of Sindh, they had been given the status of zimmis or protected people i.e, those who accepted the Muslim rule and agreed to pay a tax called jaziya. At first, jaziya was collected along with land revenue. Later, Firoz Tughlaq made jaziya a separate tax and levied it on Brahmins also, who were earlier exempted from the jaziya.

Slavery had existed in India for a long time, however, it thrived during this period. There existed slave markets for men and women. Slaves were generally bought for domestic service, for company or for their special skills. Firoz Shah Tughlaq had about 1,80,000 slaves.

Art and architecture was a combination of Islamic and Indian styles that took a new direction during the Delhi Sultanate. Domes, arches, lofty towers, minarets, Islamic script were introduced by the Turks. The dome is the prominent feature of the mosques in contrast to the shikhara of Hindu temples.

Delhi Sultans had a great taste for architecture. The architecture was a blend of Indian and Islamic styles.

The palace complex of Tughlaqabad was built during the reign of Ghiyasuddin Tughlaq. Muhammad Bin Tughlaq built the tomb of Ghiyasuddin Tughlaq on a high platform. He also built Jahanpanah, one of the cities of Delhi. Firoz Shah Tughlaq built Hauz Khas, a pleasure resort and also built the Feroz Shah Kotla fort. The Tughlaq rulers started building the tombs on an elevated platform. The Lodhi Gardens in Delhi is an example of the architecture of the Lodhis.

The three well-developed architecture styles were:

The sarangi and the rabab, new musical instruments were introduced during this period. Also, new ragas like ghora and sanam were introduced by Amir Khusrau. He is also credited with fusing the Iranian and Indian musical systems to create Qawwali. He also invented the Sitar. Ragadarpan, the Indian classical work, was translated into Persian during the rule of Firoz Shah Tughlaq. Pir Bhodan was a Sufi saint who was regarded as the greatest musician of his age. Raja Man Singh of Gwalior was a great patron of music and encouraged the composition of the great work on music called Man Kautuhal.

Read more on art and culture during the Delhi Sultanate in the link.

The Delhi Sultans gave huge importance to literature and showed more interest in the progress of Persian literature.

Q 1. How was the administration under the Delhi Sultanate?

Ans. The administration under Delhi Sultanate was very systematic. The Sultan was the head of the empire, accompanied by a Wazir or the Finance Minister. Five other ministers were also appointed for the proper administration of the sultanate:

Q 2. How was the Delhi Sultanate provincially administered?

Ans. The entire empire was divided into various Iqtas. These were further divided into smaller units called Parganas, Shiqs, and the villages.