In this exercise, the students mainly gain the idea about the special angles like straight angle, complete angle, zero angle and right angle. It also helps students understand the kinds of angles and methods used to determine them. The solutions prepared by subject experts has step by step explanation in a simple language to make it easier for the students to understand. The students can use RD Sharma Solutions Class 6 Maths Chapter 11 Angles Exercise 11.2 PDF which are provided here to boost their exam preparation. 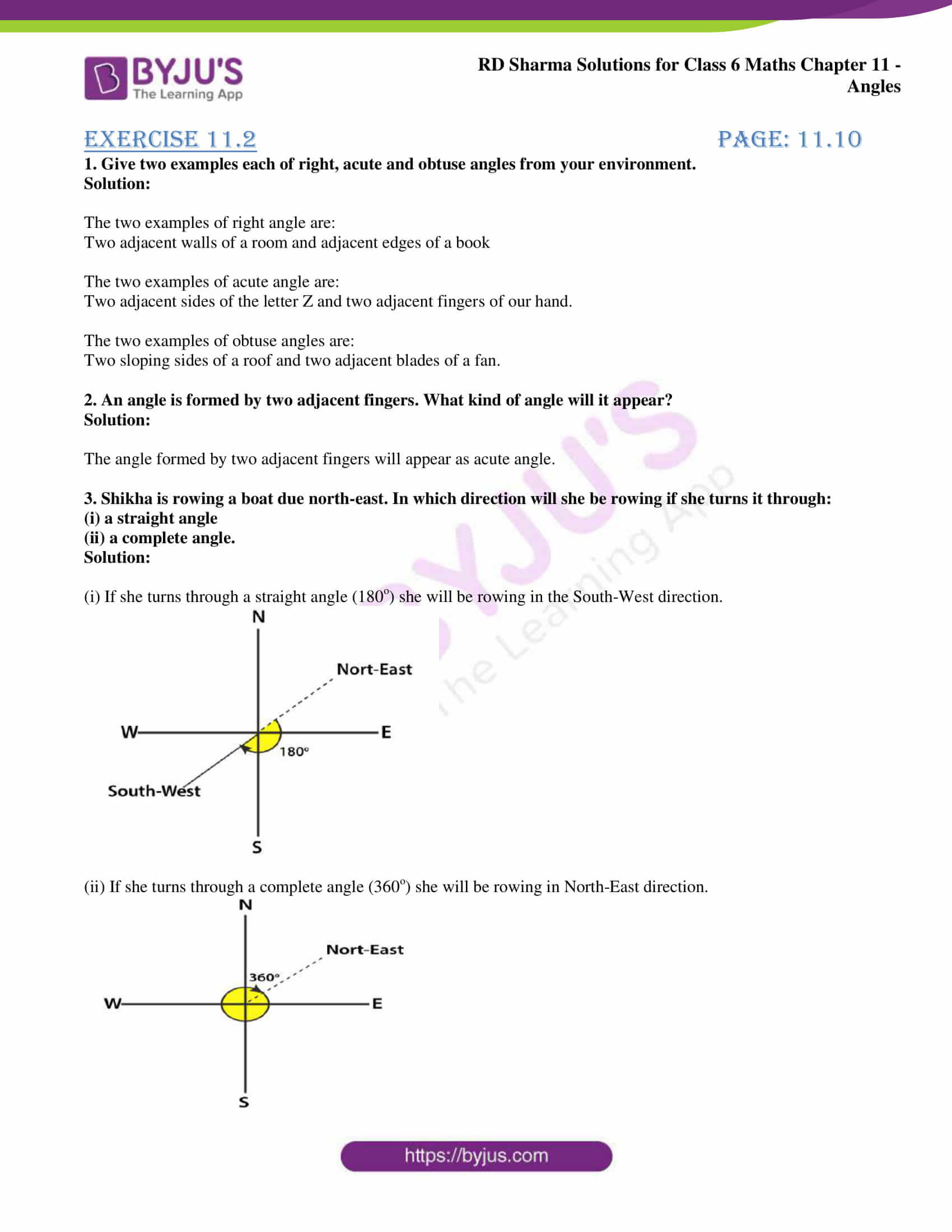 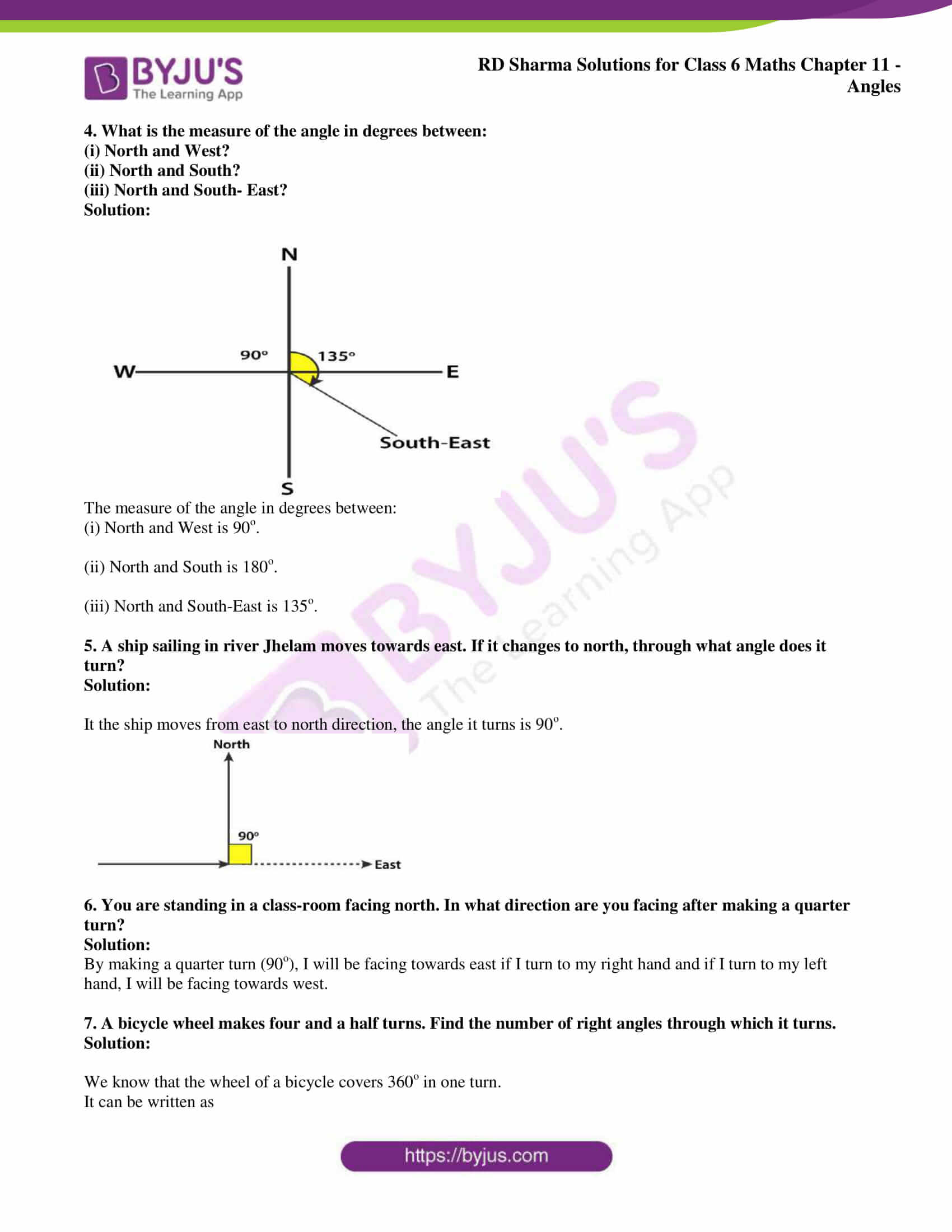 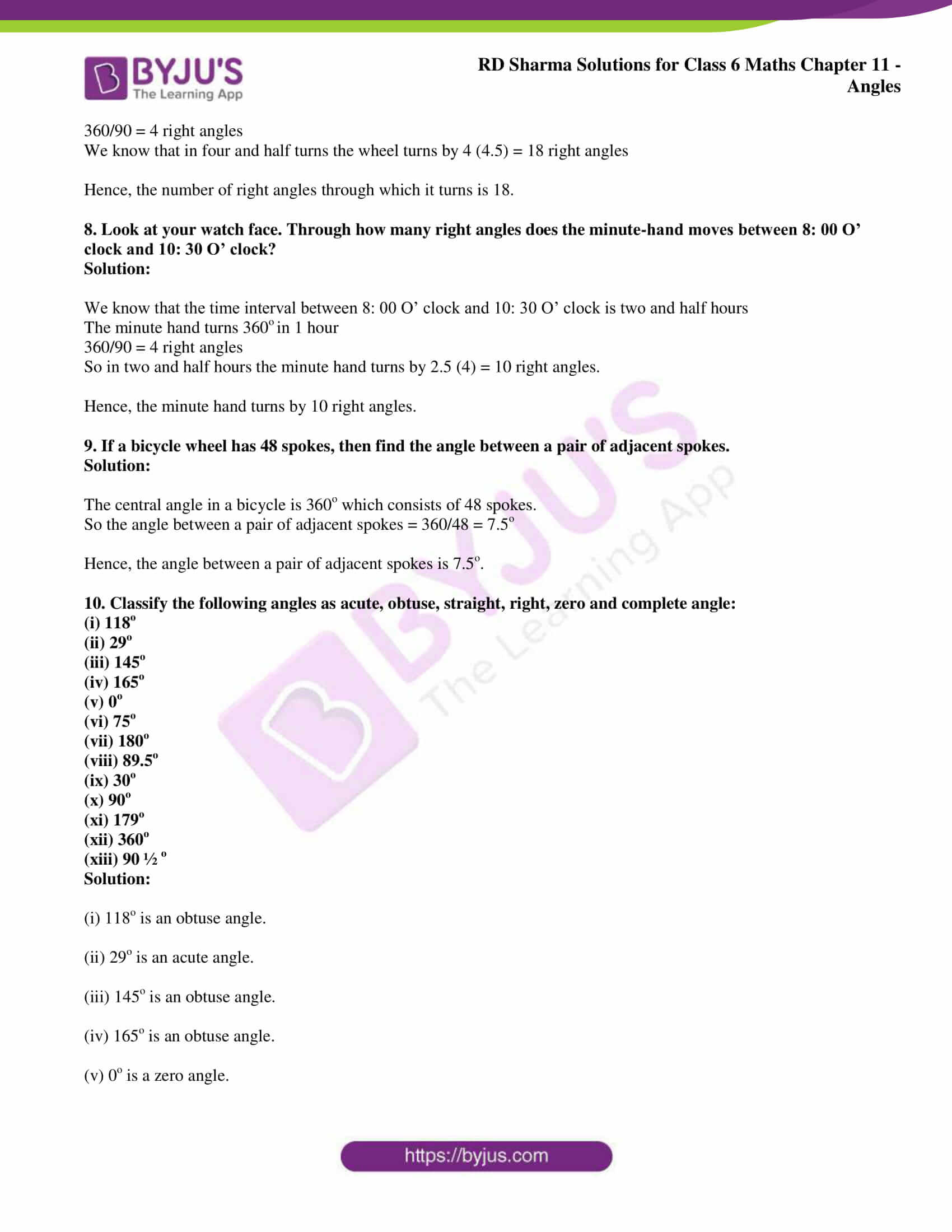 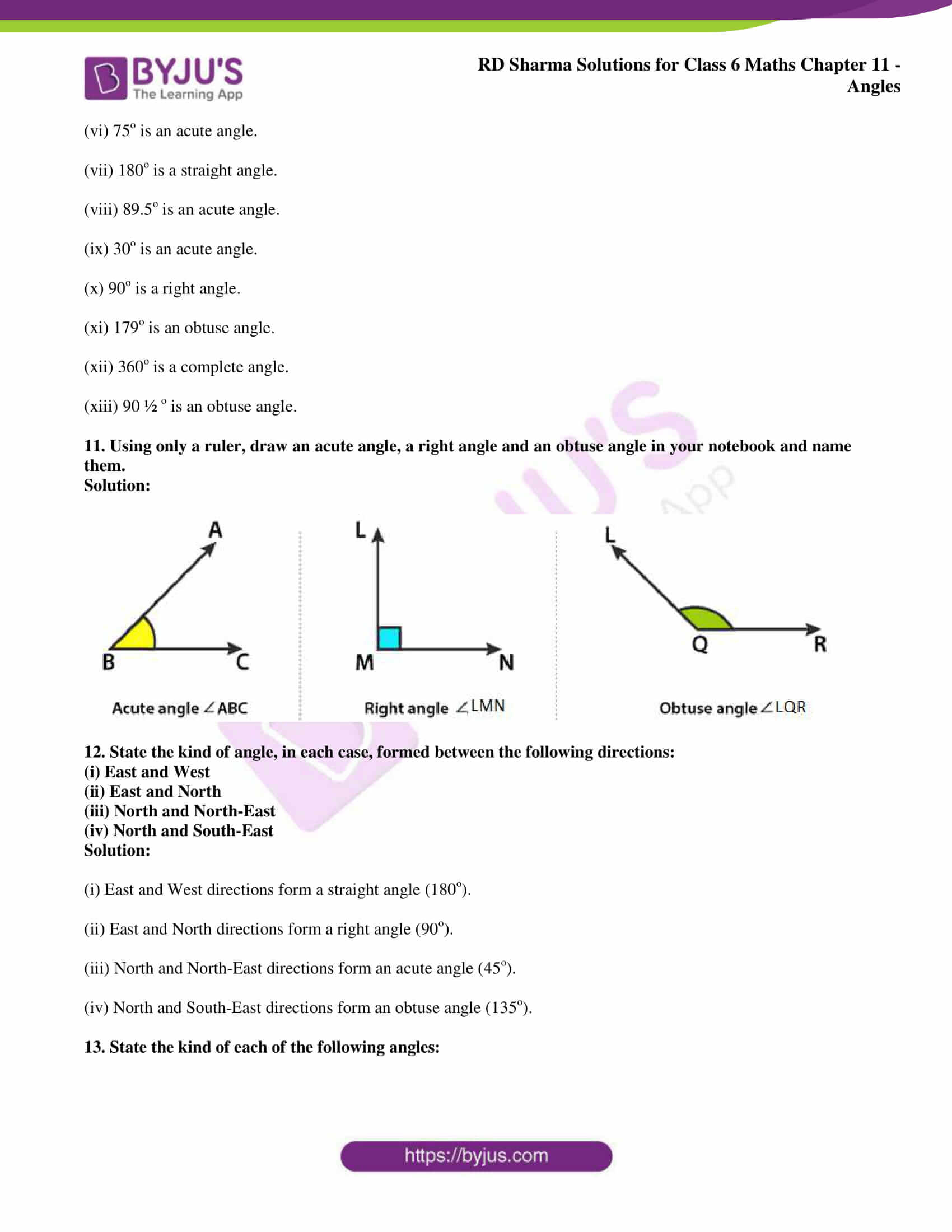 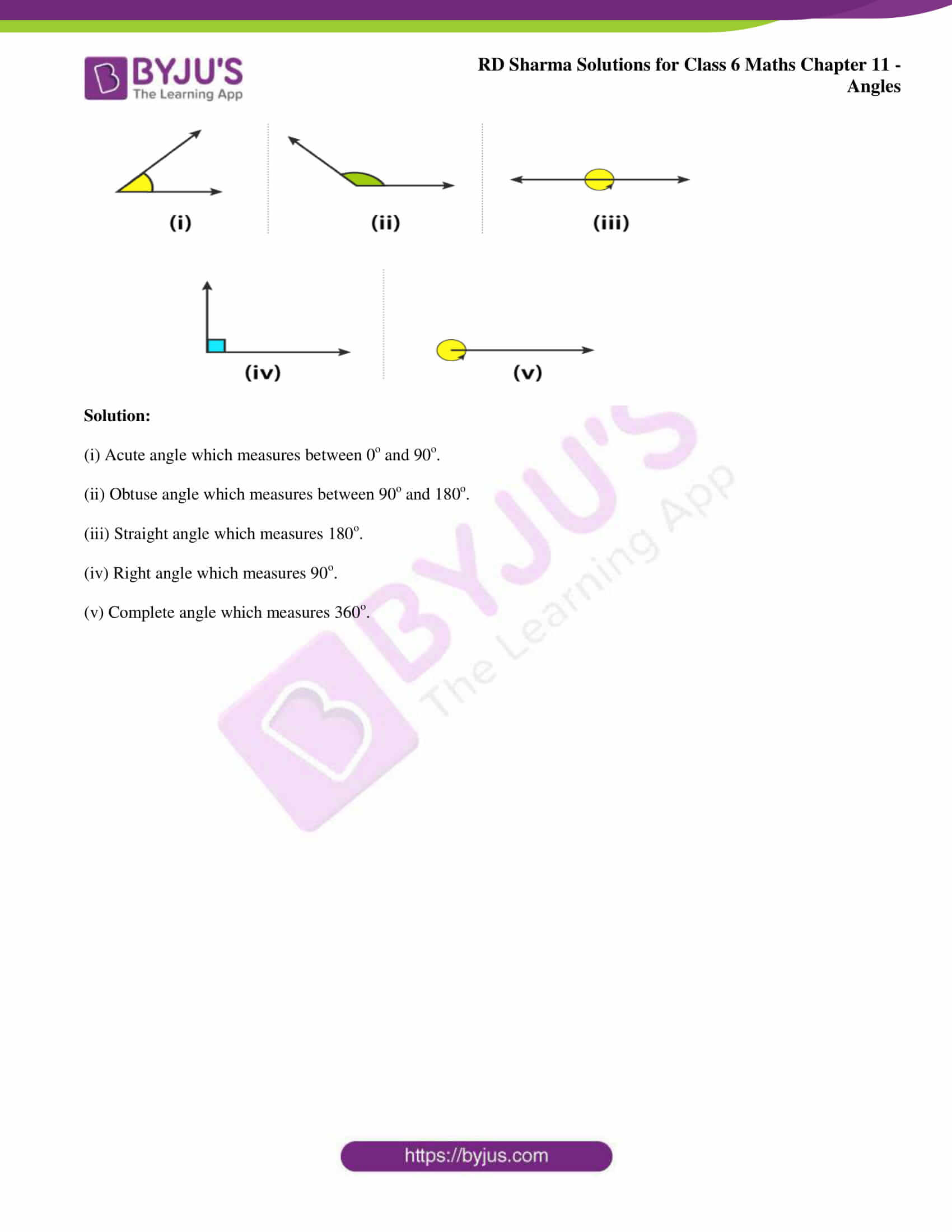 1. Give two examples each of right, acute and obtuse angles from your environment.

The two examples of right angle are:

The two examples of acute angle are:

Two adjacent sides of the letter Z and two adjacent fingers of our hand.

The two examples of obtuse angles are:

Two sloping sides of a roof and two adjacent blades of a fan.

2. An angle is formed by two adjacent fingers. What kind of angle will it appear?

The angle formed by two adjacent fingers will appear as acute angle.

3. Shikha is rowing a boat due north-east. In which direction will she be rowing if she turns it through:

(i) a straight angle

(i) If she turns through a straight angle (180o) she will be rowing in the South-West direction. 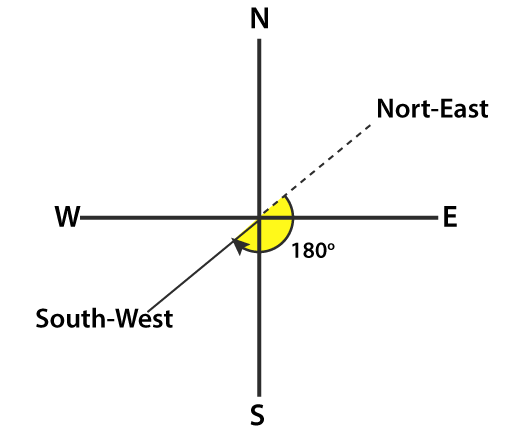 (ii) If she turns through a complete angle (360o) she will be rowing in North-East direction. 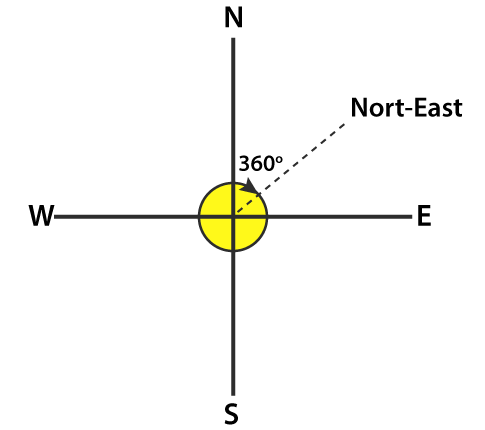 4. What is the measure of the angle in degrees between: 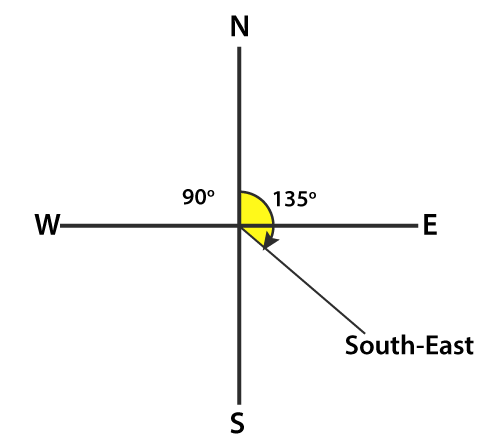 The measure of the angle in degrees between:

5. A ship sailing in river Jhelam moves towards east. If it changes to north, through what angle does it turn?

It the ship moves from east to north direction, the angle it turns is 90o. 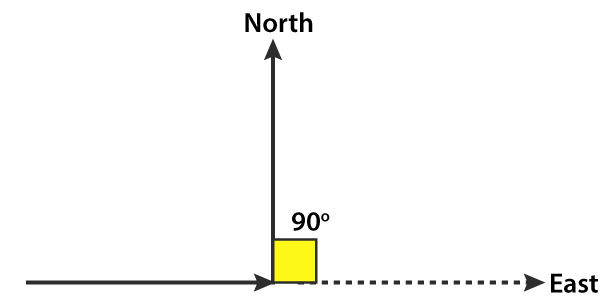 6. You are standing in a class-room facing north. In what direction are you facing after making a quarter turn?

7. A bicycle wheel makes four and a half turns. Find the number of right angles through which it turns.

We know that the wheel of a bicycle covers 360o in one turn.

It can be written as

Hence, the number of right angles through which it turns is 18.

9. If a bicycle wheel has 48 spokes, then find the angle between a pair of adjacent spokes.

The central angle in a bicycle is 360o which consists of 48 spokes.

Hence, the angle between a pair of adjacent spokes is 7.5o.

11. Using only a ruler, draw an acute angle, a right angle and an obtuse angle in your notebook and name them.

12. State the kind of angle, in each case, formed between the following directions:

(i) East and West

(i) East and West directions form a straight angle (180o).

13. State the kind of each of the following angles: 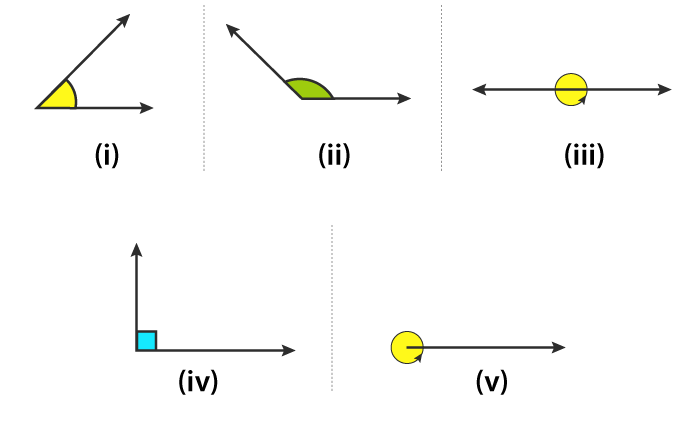 (i) Acute angle which measures between 0o and 90o.

(ii) Obtuse angle which measures between 90o and 180o.