The direction questions are one of the most repeated questions in the CAT exam. Apart from CAT, direction and distance reasoning questions are also frequently asked in most of the MBA exams and other competitive exams. The test-takers are suggested to attempt these questions effectively as they are scoring and easily solvable.

The direction and distance reasoning questions, as the name implies, includes two types of questions i.e.:

The details of both these question types are discussed below in detail to help the candidates prepare this topic easily and solve the related questions effectively.

The questions based on directions require the candidates to identify the direction of an individual or shadow from a set of statements. Some important points are given which can help to understand and solve the related question easily.

In general, there are four main directions i.e. North, South, East and West. Apart from these four, there are four additional directions derived from the main ones. They are called North-East, North-West, South-East and South-West. A chart is given below for reference. 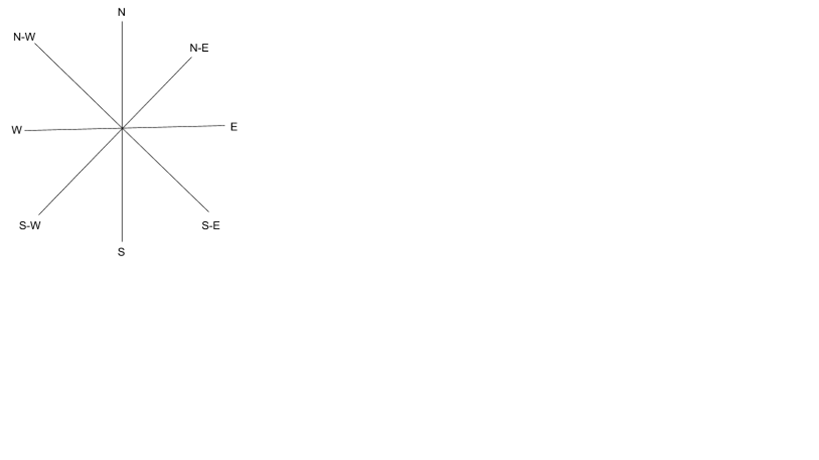 From the above statement, a direction diagram can be made as follows.

From the diagram, it is clear that D is standing in the southwest direction of A.

Mr. X and Mr. Y are facing each other and are enjoying the sunrise. If Mr. X’s shadow falls on his left side, then which direction is Mr. Y facing?

As it is sunrise, any shadow has to fall in the west direction. As it is given that Mr. X’s shadow falls on his left side, it can easily be interpreted that Mr. X is facing North (since his left side is facing west). Now as Mr. X and Mr. Y are facing each other, Mr.Y has to face South.

Often some statements are given where the subject rotates either to the left or to the right. It should always be remembered that rotating right implies clockwise rotation while rotating left implies rotating anti-clockwise.

Mr. A moves North and then turns to his right and keep walking. After that, he again turns right and walks a certain distance and then finally walks to the left. In which direction is he walking now?

The problem becomes simple if a diagram is constructed according to the given statements. From the diagram, it can be easily interpreted that Mr. A is now walking towards the east.

In most of the direction and distance questions, the candidates are required to calculate a certain parameter from the question statement. The questions can be related to the total distance walked, the shortest path, the distance between two entities, etc.

Mr. P walked 3 km towards the east. After that, he moved clockwise and walked 4 Kms. What would have been the distance if he took the shortest path from his initial position to his final position?

At first, one must construct the diagram of his movement. The movement route of Mr. P is given below. 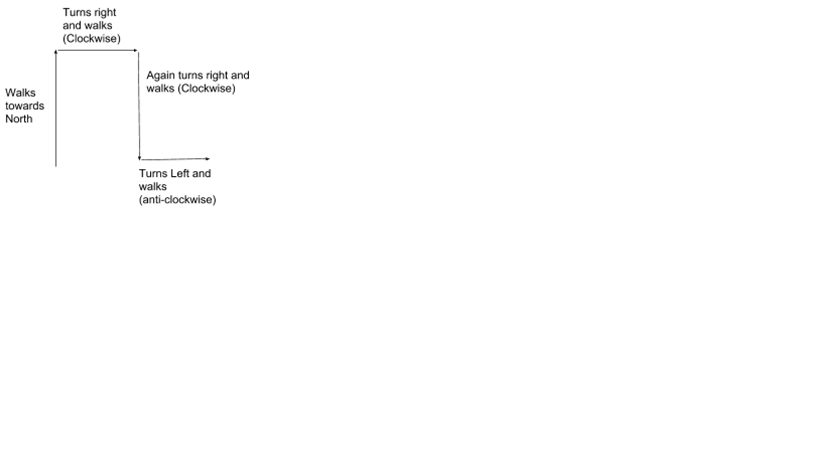 Therefore, the shortest path from the initial distance to the final distance will be 5 Kms.

First, a diagram should be constructed taking all his movements into consideration. The diagram will come up as: From this diagram, the distance between the initial and final position can be easily calculated which will be: 15m + 10m= 25m.

As the direction sense test is one of the most easily-scoring sections in the CAT exam, the candidates are suggested to be thorough with this topic and practice several questions to improve speed and accuracy. By solving the distance and direction based questions, the candidates can easily improve their CAT score and percentile.

Keep visiting BYJU’S to get more such information and lessons on different CAT exam topics. At BYJU’S the CAT aspirants are also provided with the latest notifications, sample papers and several video lessons to help them prepare more effectively and ace the CAT easily. 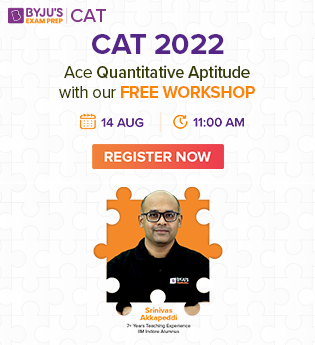