The reasoning section is one common section which is a part of all major competitive exams conducted in the country. The Alphanumeric series is an important topic in this section.

In this article, we bring you some simple tricks and tips to solve the alphanumeric questions quicker and more efficiently, along with some sample questions related to this topic.

What is an Alphanumeric Series?

As the name suggests, Alpha-numeric, a series which is formed by combining both alphabets and numbers is called an alphanumeric series. Questions from this topic are mostly asked in the preliminary phase of all Government exams.

There are a variety of types in which questions may be asked for the alphanumerical series. These include:

Candidates can check the detailed logical reasoning syllabus along with some sample questions related to the same at the linked article.

Given below are a few tips and tricks that may help you solve the questions based on the alphanumeric series:

Aspirants who are preparing for the upcoming Government exams can also refer to the links given below and ace the reasoning ability section:

Another type of questions which may be asked in the form of a number series may comprise numbers arranged both vertically and horizontally and one of element would be missing. Candidates can learn more about these questions and tips to solve them in the video given below: 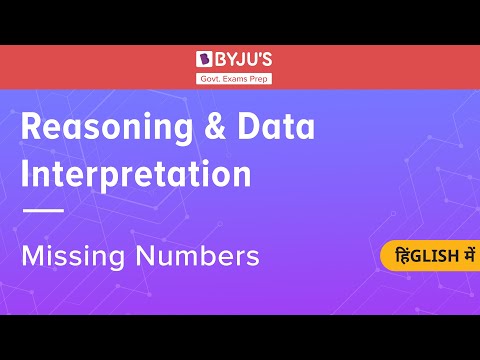 So, to make the candidates understand the concept of alphanumeric series and to provide the candidates with few examples to prepare for the exam, given below are a few solved examples.

Directions (Q1-Q2): Refer to the alphanumeric series given below and answer the following questions:

Q 1. How many vowels in the above arrangement are preceded by a symbol?

Q 2. Which is the second element to the left of the sixth element from the right?

Answer: (3) N; Sixth element from the right is E and second to its left is N

Directions(Q3-Q4): Find the missing element in the series given below:

Directions (Q5-Q6): Refer to the numerical series given below and answer the following questions:

Q 5. When all the digits in each of the given numbers are arranged in ascending order, which number becomes the highest?

Solution: When the digits are arranged in ascending order within the number, the new numbers formed are:

Q 6. When the digits within the number are multiplied with each other, the product of which number is the lowest?

Directions (Q7-Q8): Based on the digit-alphabets-symbols series given below, answer the following questions:

Q 7. How many such consonants are there in the series which are immediately followed by a symbol and preceded by a number?

Q 8. How many numbers are there in the series which are preceded by a vowel and succeeded by a consonant?

The questions given above shall help you understand the concept better and also to understand the type of questions that may be asked in the upcoming competitive exams with respect to this topic.

Also, for candidates who are looking for study for preparation tips regarding other subjects which are part of the Government exams, can refer to the links given below:

It is important that a candidate dedicates equal time in preparation for each subject as for most exams, there are sections cut off along with overall cut off.

Aspirants wishing to get any further assistance regarding the syllabus, exam information, study material or preparation tips can turn to BYJU’S for help.