Difference between Battle and War

Difference between Battle and War is explained here in detail.

A battle is a military conflict between two or more armed forces that are well defined in duration, area, and force commitment.

War is an intense armed conflict between Militaries, Governments characterized by extreme violence, aggression, destruction, and mortality that stretches for many months or years.

Candidates appearing for the Civil Service Examination conducted by UPSC can visit the given link for information on dates, structure and other details related to the IAS Exam.

This article will give relevant information on the difference between battle and war which will be of immense use for candidates appearing for UPSC prelims. 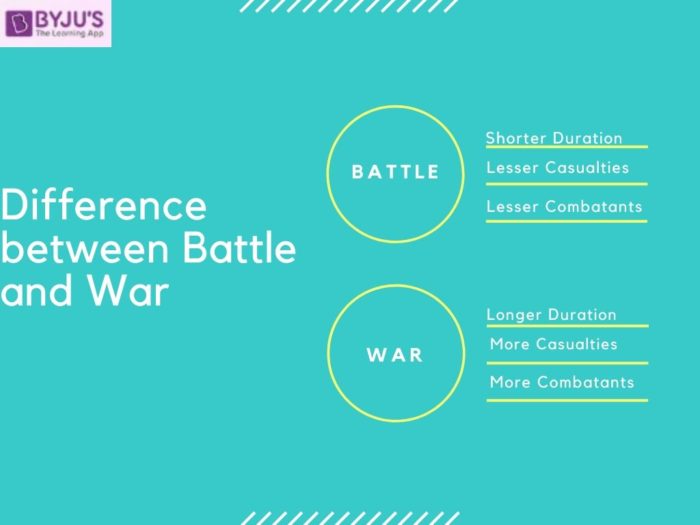 The major differences between Battle and War are:

After understanding the differences between Battle and War, visit the below-given links to understand more about the various battles and wars that took place in the past.

In what context is the word ‘battle’ used?

The word “battle” can also be used infrequently to refer to an entire operational campaign, although this usage greatly diverges from its conventional or customary meaning. Generally, the word “battle” is used for such campaigns if referring to a protracted combat encounter in which either one or both of the combatants had the same methods, resources, and strategic objectives throughout the encounter.

What is the reason for outbreak of Wars?

While some war studies scholars consider war a universal and ancestral aspect of human nature, others argue it is a result of specific socio-cultural, economic or ecological circumstances.

Before making concrete plans for the Civil Services exam, candidates should have a thorough knowledge pertaining to the Syllabus of UPSC.