The cause of hunger is poverty. It is a global social issue. It is a topic covered in UPSC Syllabus. ‘Issues relating to Poverty & Hunger’ is a title under the IAS Exam GS-II syllabus. As an aspirant to India’s coveted exam of UPSC, you should know that India’s poverty and hunger issues have always been debated.

On 9th July 2021, Oxfam has released a report, titled, “The Hunger Virus Multiplies,” that talks about deaths from hunger in the wake of the COVID-19 pandemic. Aspirants can get the key findings of this report in the article below.

As per the Asian Development Bank‘s figures:

Who are the poor?

The characteristics of the poverty-ridden people are:

To read more on ‘Who are the poor?‘, refer to the linked article.

How are the poor people identified?

In India, Niti Ayog carries poverty estimation.  It estimates the levels of poverty in the country on the basis of consumer expenditure surveys conducted by the National Sample Survey Office (NSSO) of the Ministry of Statistics and Programme Implementation.

Read more on How Are Poor People Identified? in the linked article.

The following can be some reasons causing poverty in India

Read more on What Causes Poverty? in the referred link.

Summary of the Report – Deaths from hunger are outpacing the virus. Ongoing conflict, combined with the economic disruptions of the pandemic and an escalating climate crisis, has deepened poverty and catastrophic food insecurity in the world’s hunger hotspots and established strongholds in new epicentres of hunger.

As per the latest Oxfam’s report on hunger, the following are the extreme hunger hotspots: 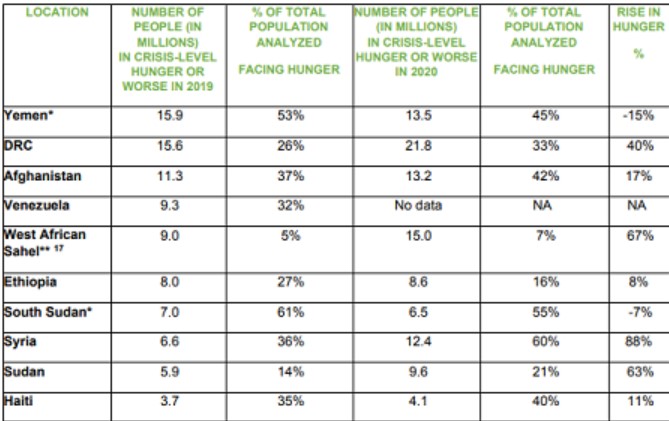 The report reflects on the three lethal Cs:

Initiatives by  Government to Curb Poverty in India

The government of India took several initiatives to eradicate poverty from the country. A few of them are discussed below-

Initiatives by Government to fight against Hunger in India

As per the Global Hunger Index 2020, India is in 94th position out of 107 countries i.e. Hunger and malnutrition is a serious problem in India. A detailed report on Global Hunger Index on the linked page. The Government of India took several initiatives to fight against hunger across the nation which is discussed below-

Candidates can go through various other Poverty Alleviation Programmes initiated by the Government of India to fight against hunger and poverty across the country.

Global Initiative Against Poverty and Hunger

Food is at the core of the Sustainable Development Goals (SDGs). Goal 2 of SDG deals with Zero Hunger. Given below are some global level initiatives to fight poverty and hunger-

Aspirants preparing for UPSC 2022 should also go through the below-mentioned links: