The concepts and questions on Dice might mystify some people but it can be a cakewalk for the people with a great visual bent of mind and visualization. It’s an extension of Cubes but with a slightly higher logic and conceptual application.

Dice is a part of the logical reasoning section of aptitude. The frequency of the appearance of questions on dice is high every year.

Following is the list of exams where the questions on dice are frequent and evident in all the question papers.

What is a dice?

Dice is a cube having different numbers on all its faces. The numbers are usually a single digit, from 1 to 6.

To explore various SBI Exams at length, check at the linked article.

A schematic representation of dice with numbers

Numbers on a die:

Numbering scheme of a dice

There are two types of dice:

When the dice are rolled, if the number on the faces of the two dice do not match each other, they are called as standard dice.

If one or more than one number matches between two dice than it is called as an ordinary dice.

In the above dice, the number ‘3’ is common in both the dice.

A schematic representation of an open die.

To explore Logical Reasoning in detail, check at the linked article. 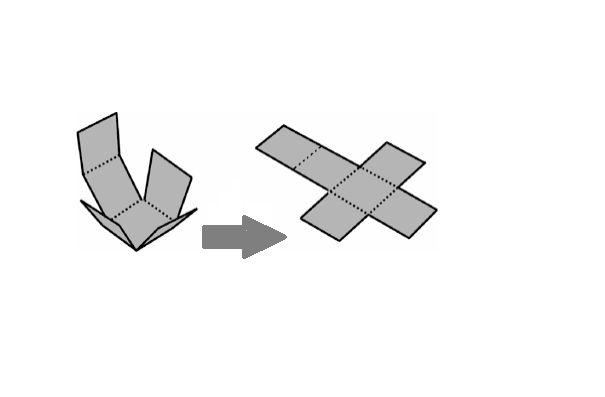 Deconstructed Dice: This section of dice gives the flattened-out version of dice, the questions will be based on the visualization of what is at the other end of the constructed dice.

There are a few rules that will help in solving the questions on dices in the easiest way. The rules are as follows:

If one of the numbers is common in both the dice when two dice have the same surface, then the remaining surfaces of both dice are opposite to each other.

In the above two dice, the number 4 is common and the numbers 3 and 5 on one die and 1 and 2 on the surface of the other die are opposite to each other respectively. I.e. The number 3 is opposite 1 and 5 is opposite to 2.

To explore more about SBI Syllabus, check at the linked article.

If any two numbers are the same in two dices irrespective of their position on the dice then the remaining third number in both the dice are opposite to each other.

In the above scenario, irrespective of their place or position the two numbers 6 and 2 are common in both the dice. Then the third number 5 on one first die and 3 on the second die are opposite to each other.

If there is one element common on both the dice at the different position, then rotate the dice in a clockwise direction to get the opposite surface.

The number ‘2’ is common in both the dice, but it is occurring at a different position. In order to find out, the number appearing on the opposite face, rotate the die in a clockwise direction with the common number as the reference.

To explore Directions in detail, check at the linked article. 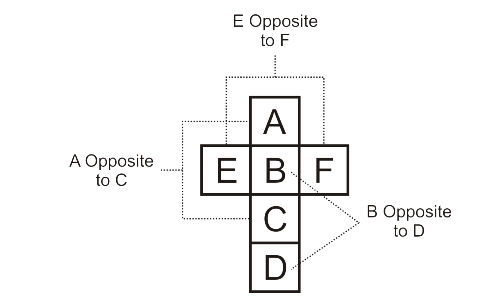 A flat end version of a die

Observations of an open die:

The faces E & F, A & C, B & D are opposite to each other and their surfaces never touch each other. 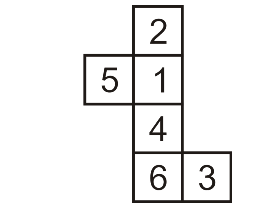 The number of a possible combination is:

Hence the correct answer is option 3 i.e. only C.

To explore Calendars in detail, check at the linked article.

Example 2: Finding the opposite side.

If the surfaces of the above die are reconstructed to form a perfect die. How many dots lie opposite to the face having three dots?

To explore Seating Arrangement in detail, check at the linked article.

Choose the die that is similar to the die, formed from the open die.

How many dots are contained on the face opposite to that containing four dots?

Two positions of a dice are shown. When 4 is at the bottom, what number will be on the top?

It can be observed from both the dice, if 2,3,5 and 6 adjacent to 1. Then the number opposite 1 should be 4. Hence the correct answer is option A.

To explore Clocks in detail, check at the linked article.

A dice is numbered from 1 to 6 in different ways. If 1 is adjacent to 2, 3 and 5, then which of the following statements is necessarily true?

Candidates can also refer to the links given below to prepare themselves based on the latest exam pattern and syllabus: