Demographic Dividend meaning – It is the potential for economic gains when the share of the working-age population (15 years – 64 years) is higher than the non-working age group.

Demographic dividend occurs when the proportion of working people in the total population is high because this indicates that more people have the potential to be productive and contribute to growth of the economy.

Due to the dividend between young and old, many argue that there is great potential for economic gains, which has been termed the “demographic gift”. In order for economic growth to occur the younger population must have access to quality education, adequate nutrition and health including access to sexual and reproductive health.

What is a Demographic Dividend? 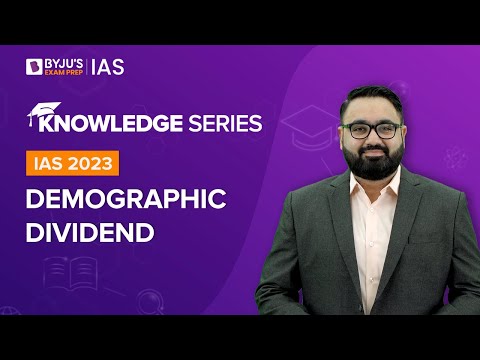 As per the United Nations Population Fund (UNFPA), the demographic dividend is the economic growth potential resulting out of changing population age structure with a large section of people in the working-age group of 15 years to 64 years as compared to the non-working age population of below 14 years and above 65 years.

Change in population structure occur due to

Falling birth rate and lower fertility rate will contribute to a reduction in expenditure, increased longevity will lead to an increase in the size of the working-age population.

To know how demographic dividend and other factors impact the Indian Economy, visit the linked article.

Which country is in Stage 4 of Demographic Transition?

What are the 5 stages of Demographic Transition?

The 4 stages of Demographic Transition are Stage 1: In this stage the population is low but it is balanced due to high death rate and high birth rate.

Stage 2: In Stage 2, the population will start to rise because the death rate will start to fall due to improved medical care, sanitation, water supply, food security etc. The birth rates will keep rising in stage 2.

Stage 3: The gap between Birth and death will keep getting narrower. The reduction in gap is due to reduction in birth rate due to various reasons like increased employment, more importance to material possessions than large families, empowerment of women etc.

Why is Demographic Dividend Important?

Demographic Dividend is very important. Historically demographic dividend has contributed upto 15% of the overall growth in advanced economies. Demographic Dividend helps in increasing the workforce, there will be rapid urbanisation and industrialisation. It leads to more investment in physical and human infrastructure. The productivity of the country’s economy increases due to increased labour force. Demographic Dividend will help in witnessing a massive shift towards middle-class society.

Who coined the term Demographic Dividend?

The term Demographic Dividend was coined by David Bloom. He emphasized the importance of demography to economic growth. David Bloom attributed a large portion of the economic growth of East Asia in 1965 to 1990 to the region’s working-age population,which led to increase in productivity.

For more of UPSC-related preparation materials visit the linked articles:

Choose the correct answer from the below given-options

C) All the above given statements are true.

D) None of the above given statements are true.

About how much of India’s population is in the 15 – 59 years demographics?