Geography is an important part of the UPSC syllabus. Many questions are asked every year in both the prelims and the mains from this subject. It is also a very interesting subject. In this article, you can read all about the drainage system in India for the IAS exam.

The flow of water through well-defined channels is known as drainage and the network of such channels is called a “drainage system”. The drainage system of an area is the outcome of the geological time period, nature and structure of rocks, slope, topography, amount of water flowing and the periodicity of flow. The area drained by a single river system (river and its tributaries) is called its drainage basin. An elevated area (mountain or an upland) that separates two drainage basins is called a “water divide”. The world’s largest drainage basin is of the Amazon river and in India, the river Ganga has the largest river basin.

The Indian drainage system can be grouped into two based on the discharge of water (orientation to the sea).

These two drainage systems are separated from each other through the Delhi ridge, the Aravallis and the Sahyadris. About 77% of the drainage is oriented towards the Bay of Bengal while 23% discharge their water into the Arabian Sea. 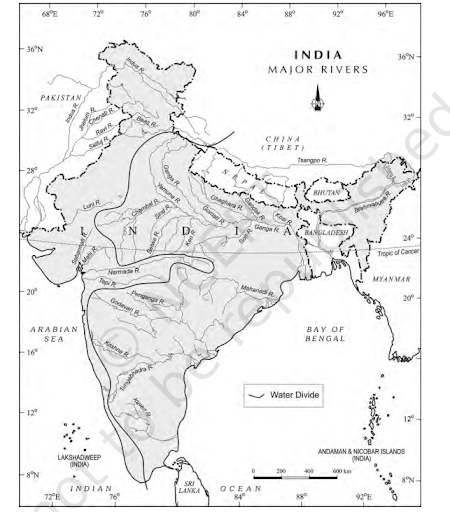 The Indus, the Ganga and the Brahmaputra systems are the three major river systems of the Himalayan drainage system.

Right and Left bank tributaries of the Indus river

This treaty was signed between India and Pakistan on 19th September 1960, regarding the sharing of water of the Indus and its tributaries. It was essentially a confidence-building measure between the two countries. The treaty divides the Indus river system into two segments, eastern rivers – Satluj, Beas and Ravi and western rivers – Chenab, Jhelum and Indus. According to this treaty, India has been given rights to use the waters of the eastern rivers while Pakistan is entitled to use western rivers. The treaty gives India 20% of the water from the Indus river system and the rest 80% to Pakistan.

Know more about the Indus Water Treaty in the link.

Know more about the Brahmaputra River System in the link.

The Peninsular rivers are characterised by fixed course, absence of meanders and non-perennial flow of water. The Narmada and Tapi which flow through the rift valley are, however, exceptions.

The rivers and their origins are mentioned below.

East flowing rivers flow from west to east due to the gradient of the land and finally drain into the Bay of Bengal. These rivers carry huge amounts of sediments and therefore, form delta on the east coast (west-flowing rivers form estuaries).

A lake is a large body of natural water accumulated in a depression. Apart from natural lakes, the damming of the rivers for the generation of hydel power has also led to the formation of lakes (artificial ones), such as Guru Gobind Sagar (Bhakra Nangal Project). These lakes differ from each other in size and other characteristics. Most lakes are permanent and have some perennial source of inflow of water like a glacier, eg. Dal lake. There are some lakes that contain water only during the rainy season (temporary lakes).

Get a list of the important lakes in India in the link.