This article will describe in detail the problem of plastic waste imports into India.

These UPSC Notes on plastic waste imports, and the problems caused by it to the environment, especially with respect to India are aligned with the UPSC Syllabus and aspirants should prepare this topic for General Studies Paper III.

Pollution from plastics, problem of their disposal and resultant environmental concerns and issues are frequently seen in the news; and hence the topic’s relevance for the UPSC Mains. 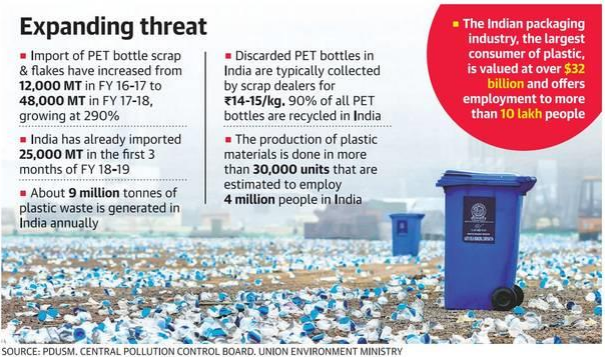 Proposed alternatives and their limitations

An eco-friendly product, which is a complete substitute of the plastic in all uses, has not been found till date. In the absence of any suitable alternative, it is neither practical and nor desirable to impose a blanket ban on the use of plastic all over the country. The real challenge lies in improving plastic waste management systems.

Why is plastic waste a problem?

Bottled water has become an important source of plastic waste, along with single-use straws, cutlery, food containers and other plastic items. Plastic debris is clogging up landfills, blocking drains, polluting waterways and contributing to biodiversity loss. Plastic litter on roadsides and beaches and in other public spaces is an eyesore. PET has helped turn water — and other drinks — into portable and lightweight consumer products. But PET takes hundreds of years to biodegrade and, if incinerated, generates toxic fumes.Barely 18 percent of plastic waste is recycled globally. The rest ends up as trash and litter. For example, tens of billions of easily recyclable PET bottles are discarded as garbage every year.

What are the types of plastic waste?

How many animals die from plastic?

Over 1 million marine animals (including mammals, fish, sharks, turtles, and birds) are killed each year due to plastic debris in the ocean. Currently, it is estimated that there are 100 million tons of plastic in oceans around the world.

One of the earliest examples was invented by Alexander Parkes in 1855, who named his invention Parkesine. We know it today as celluloid.Polyvinyl chloride (PVC) was first polymerised between 1838-1872.A key breakthrough came in 1907, when Belgian-American chemist Leo Baekeland created Bakelite, the first real synthetic, mass-produced plastic.