In July 2020, the Ministry of Environment released the Tiger Census Report on the eve of Global Tiger Day (29th July). India has 70 percent of the world’s tiger population. It has been announced that Conservation Assured | Tiger Standards (CA|TS) framework will be extended to all 50 Tiger Reserves of India.

As per the 4th All India Tiger Estimation (AITE), there are 2967 tigers in India. Get more details on its conservation and check the tiger reserves in India map for quick revision for UPSC 2022.

RSTV – Big Picture: Importance of Tiger Conservation – Aspirants can check the linked article to get more points on the topic from Rajya Sabha TV discussion (Aug 2020).

Tiger Symbol for Power and Energy

Tiger is the National Animal of India and also has a significant position in Indian culture.  Tiger usually symbolizes Power and enormous Energy.

Some interesting facts related to Tigers in India:

Get more interesting facts about the National Animal of India in the linked article.

The list of tiger reserves in India is given below:

List of Tiger Reserves in India
Tiger Conservation in India is an important static GK topic for the UPSC exam. For information on various static GK topics check the article linked here.

The geographical location of Tiger Reserves in India [Map] is shown below: 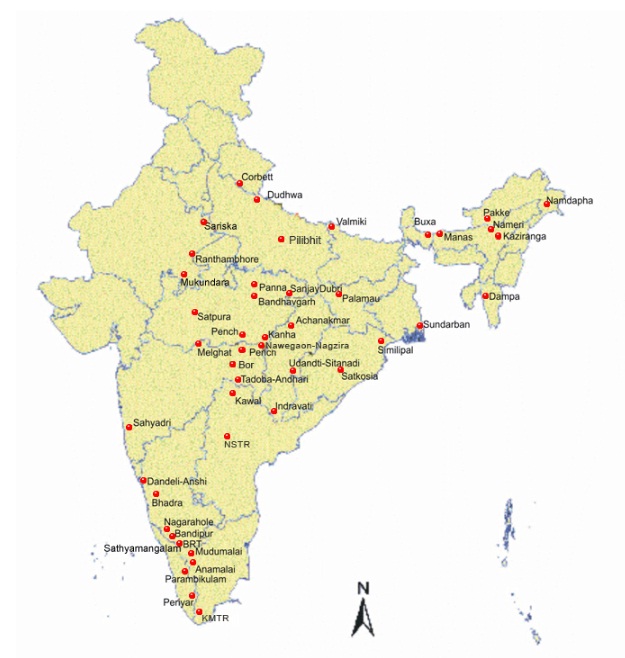 As seen on the map, it is evident that the tiger reserves in India are mostly in the Central and Eastern parts. It is necessary on the part of the inhabitants to help the government to establish more Tiger reserves in the Western areas as well.

Recently, the National Tiger Conservation Authority has agreed to the formation of four new tiger reserves in:

The Critical Tiger Habitats (CTHs) as per Wildlife Protection Act, 1972, are core areas of the tiger reserves meant to be “kept inviolate for the purpose of tiger conservation.” For recognition of critical tiger habitat, an expert committee is constituted and the final decision is notified by the state government.

The Tigers are seen largely in the tropical forests of Asia. The recent reports generated by different international organizations show the tiger population is decreasing. According to the IUCN Red list, the tiger is listed as an endangered animal. The major threat faced by this species are Poaching, destruction of habitat, insufficient prey, etc. the tigers are killed for skins, bones, and meat.

The list of major threats to the Tiger Population are:

Due to anthropogenic activities, the tiger population has lost its habitat. The loss of habitat resulted in the reduction of their prey species. They started coming out of the forest and come to the village in search of prey.

Tiger those who came in search of its prey they attacked domestic animals, and human beings. In vengeance, tigers are often killed by angry human beings.

Read in detail about Human-Wildlife Conflict from the linked article.

Hunting of tigers is a huge issue faced by the tiger population from ancient times. Hunting stands as a symbol of status. The people used the bones, teeth of the tiger for commercial purposes which can also be named as illegal trade.

The body parts are used for medicinal purposes also. This has caused the utmost decline in tiger populations since 1930. Poaching is the next threat to the leftover tiger population.

The anthropogenic destructive activities that have caused the devastation of habitat and prey species are the main long-term threats to the continuation of the declining tiger population in the country.

Man and animals compete for finding their habitat. Tigers need large territories. Along with the habitat, tigers have also experienced a severe loss of prey species populations such as antelopes and deer.

The man has acquired the forest land for human settlements and industrial activities. This has ultimately resulted in complete destruction of animal habitats.

The same affected the climatic condition, harmony, and poses a threat to the existence of human beings. The Ken-Betwa River interlinking project which intends to irrigate the drought-hit Bundelkhand region is also a reason for the declining Tiger population in India. According to the wildlife experts, the Panna Tiger Reserve which is located near this place will have a greater impact due to the project.

Rise in Population of Tiger

Recent years have seen a rise in the population of wild lions and tigers in India. The government has initiated many programs related to the conservation of the Tiger population in the country.

According to the World Wildlife Fund and the Global Tiger Forum, the figure of wild tigers has gone up to 3,890 which earlier was 3200.

The wildlife policy of India embraces conservation and protection through the provision of national parks and sanctuaries. This has assisted their sustainable growth and a drastic declining man-animal conflict. A proactive judiciary has shaped a well-built restriction against poachers.

India is now home to 70% of the total Global Tiger Population. The various strategies that are planned for implementation include:

The anti-poaching strategies are also planned for implementation. The latest censuses show an augment in the number of tigers across the country in different National Parks which is evidence that preservation efforts do have an optimistic impact on the environment and wildlife.

Reasons for the rise in the population of Tiger

A vigorous Tiger population shows the strength of the ecosystem and self-sustenance which are the key objectives of Project Tiger under the National Tiger Conservation Authority.

By launching the Project Tiger, the Government of India has taken a revolutionary initiative for conserving its national animal. It was launched in 1973. It is a 100% Centrally Sponsored Scheme of the Ministry of Environment, Forests and Climate Change.

The Project Tiger is administered by The National Tiger Conservation Authority (NTCA). It is a statutory body of the Ministry with an overall supervisory and coordination part, performing capacities as gave in the Wildlife (Protection) Act, 1972.

The Project Tiger launched in 1973 is a 100% centrally sponsored scheme. It gives fund help to the ‘tiger range States’, for in-situ conservation of tigers in the chosen tiger reserves. It has put the endangered tiger on a guaranteed path of revival by protecting it from extinction. The Project Tiger aims to promote an exclusive tiger agenda in the core areas of tiger reserves, with inclusive people participation.

The habitats covered under Project tiger are:

The Project Tiger has put the tiger on a certain course of revival from the edge of destruction. The population of tigers in the country has been augmented considerably after the establishment of the project. It has contributed to numerous indescribable environmental profits to society. The project has opened a wide door of tourism and thereby employment opportunities. This initiative has brought the participation of local people and their participation has made the habitat to revive.

The UPSC has asked a question regarding tiger reserve in UPSC civil service main examination. This shows the importance of the topic. Along with that, we are providing probable UPSC question for practicing.

The issue of tourism in core areas of tiger reserve forests in the country is a subject matter of debate. Critically examine various aspects of this issue, keeping in view relevant recent judicial pronouncements.

Click here to get the UPSC Previous Year Question Paper

Frequently Asked Questions on Tiger Reserves and Conservation in India

Q 1. How many Tiger Reserves are there in India?

Ans. Based on the data by Wildlife Insitute of India, there are 51 Tiger Reserves in India (as of May 2021). To save the endangered species of tiger in the country, Project Tiger was launched by the Government of India in the year 1973.

Q 2. Which state has the highest tiger reserves in India?

Ans. As per the Tiger Reserve in India map, Madhya Pradesh has the highest number of Tiger Reserves. There are six tiger reserves in the state:

Q 3. Which city is also known as the tiger city in India?

Ans. Nagpur is also called, “Tiger Capital of India ” as it connects many Tiger Reserves in India to the world.