The civil services exam final results were released on September 24, 2021, and Pulkit Singh from Chandigarh bagged the bagged AIR 26 in the UPSC CSE 2020. Pulkit Singh, IAS Topper for 2020 cracked the exam in the third attempt and took mechanical engineering as his optional subject.

All aspiring candidates can read about Pulkit’s journey, background, bio, educational qualifications, preparation strategy and more further below in this article.

Read about the IAS Success Stories of other UPSC toppers at the links given below:

Pulkit belongs to a family of farmers and Army Jawans from Chandigarh. He completed his primary education from a school in his village and then moved to the Army Public School for his secondary education. He has done an Integrated Dual Degree course in Mechanical Engineering from Banaras Hindu University (BHU).

Number of Attempts – Qualified in the third attempt

Check out IAS Topper Pulkit Singh’s Mock Personality Test at BYJU’S interview coaching taken up by the esteemed panellists. This will guide aspirants in preparing themselves for the IAS Interview in the upcoming recruitment: 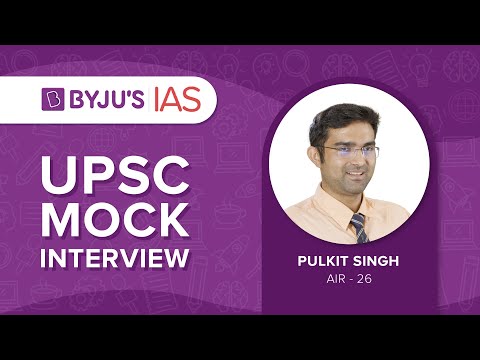 Since this was not Pulkit’s first attempt, he learnt from the mistakes made by him in the previous years and overcame the flaws to crack the civil services exam and achieving a rank within the top 30 across the country.

His preparation strategy is a perfect example of how to prepare for the UPSC CSE while being a working professional. He opted out of DRDO as he could not sufficiently devote time to UPSC preparation and then with his next job managed his work and studies simultaneously. Candidates can also refer to the UPSC Preparation Strategy for Working Professionals at the linked article.

Pulkit focussed more on the General Studies paper in the prelims exam and the descriptive answers for the UPSC Mains. Being from an engineering background, he was familiar with the objective and methodological prospects and had to work on his answer writing skills.

He gave multiple mock tests for the written examinations and mock interviews to finally crack the civil services exam. It was his dedication and perseverance over the years that helped Pulkit achieve his goal of entering the Indian bureaucracy.