“I never expected to get the 1st rank.”

Kanishak Kataria, a data scientist working in the silicon valley of India, Bangalore, secured the all-India rank 1 in the 2018 UPSC civil services exam. An alumnus of IIT Bombay, Kataria was able to crack one of the toughest exams in the country in his very first attempt. It is also inspiring to know that he left a job that was fetching him 1 crore as salary abroad to return to India and be a part of the country’s emerging story. Read on to know more about the IAS topper 2018 Kanishak Kataria. 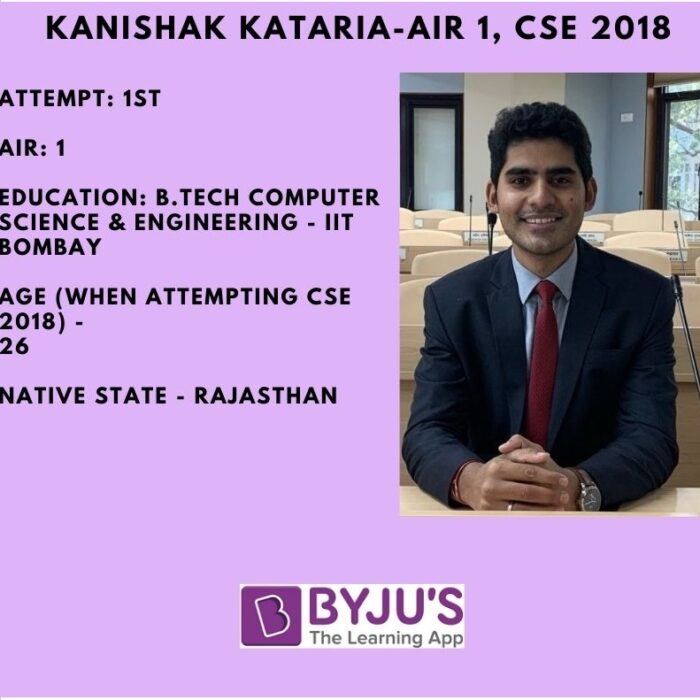 UPSC topper 2018, Kanishak Kataria  is a native of Jaipur, Rajasthan. He comes from a family of civil servants. His father and uncle are in the services. His father, Sanwar Mal Verma, an IAS officer, is currently the Director of the Social Justice and Empowerment Department in Rajasthan. His uncle, K C Verma, is a Divisional Commissioner in Jaipur.

Kanishak Kataria says, “Since childhood, I have been watching my father and uncle working as senior officials for the country. I too wanted to be the same…”

Kanishak Kataria completed his schooling from Kota’s St. Paul’s Senior Secondary School. In 2010, he had secured an amazing rank of 44 in the IIT JEE. Accordingly, he joined the IIT Bombay where he pursued a BTech in computer science and engineering. He completed his engineering degree in 2014.

Until 2016, Kanishak Kataria worked with Samsung as a software engineer in South Korea. There, he was reportedly drawing a fat salary of a crore rupees. Working “for the sake of money” did not satisfy him. He says, “Somewhere down the line, I had developed an aspiration to be a part of India’s growth story,”.

Even an enviable salary and a plum job could not keep him from his homeland. Kanishak Kataria returned to India and started his IAS preparation. He also started working at QPLUM in Bangalore as a data scientist. Since he did not have much idea about the exam and its unique challenges, he stayed in Delhi and took coaching for about 7 – 8 months. But from March 2018, he stayed back home and engaged in self-study.

For the prelims exam, Kataria went through the previous years’ UPSC question papers and enrolled for test series.

Kanishak Kataria opted for mathematics as his optional subject out of genuine love for the subject. He spent more time for his optional since it has a huge syllabus.

Check the preparation strategy for Mathematics Optional for UPSC at the linked article.

For the mains exam, Kataria spent 13 – 14 hours studying everyday. His dedication and determination is evident from the fact that for about 2 months before the mains, he completely shut himself off social media. He also reveals that he never gave much thought to the results, and focussed only on the exam and the preparation.

His success mantra, in his own words, is hard work and staying positive. Having secured the first rank and having fulfilled his dream of becoming an IAS officer, Kanishak Kataria now wants to work for the betterment of the country in his new capacity.

It is advisable for the candidates to go through previous years’ UPSC prelims question paper book to get an idea about the nature of the questions asked in the UPSC-CSE prelims examination.To know more about UPSC Prelims, check the linked article.

The UPSC released the marks scored by the successful candidates, indicating the subject-wise breakup of the marks. Kanishak Kataria scored a total of 1121 marks out of a total of 2025 marks. The following table reveals the subject-wise marks of the UPSC Topper 2018. Candidates can go through Kanishak Kataria essay copy, optional and GS answer sheets to get an idea about answer presentation in the mains examination.