The OSI Model or the Open Systems Interconnection Model is a conceptual framework which describes the functions of a networking system. It is used for the transfer of data over a network which moves through different layers.

From the competitive exam perspective, the OSI Model plays a very important part and questions from this topic may be asked in the Computer Knowledge section of the question paper.

In this article, we shall discuss in detail the OSI Model and its 7 layer architecture. Also, candidates preparing for upcoming exams can get sample questions based on this concept for practice and preparation.

The seven layers of an OSI Model include Physical, Data Link, Network, Transport, Session, Presentation, and Application. Using this model, the functioning of a networking system can be easily explained.

Given below are a few other links which will help candidates understand the other important computer-related concepts in detail:

An Introduction to the OSI Model

Before learning about the detailed structure of the model and its seven layers, given below are a few points of introduction related to the Open Systems Interconnection Model which one must know.

To learn in detail about the Fundamentals of Computer, candidates can visit the linked article.

7 Layers of the OSI Model 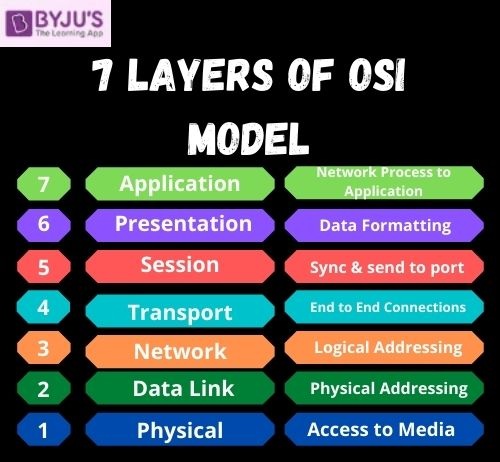 Discussed below is each stage of the Open Systems Interconnection Model in detail. Candidates are advised to go through these carefully to understand the structure and the functioning of the model in a systematic manner:

On the whole, the entire process of transfer of raw data into processed data and finally to the user or the application can be done through this OSI model. It can detect eros, transmit the data and format it during the course of the above-mentioned seven layers.

Questions based on the OSI Model may be asked in the Computer Awareness section for the various competitive exams, especially Bank, SSC, RRB, Insurance, etc. To be able to answer these questions efficiently, one must comprehend the information discussed above carefully and prepare themselves well enough.

Since the Computer Knowledge section is scoring and easy in comparison to the other subjects included in the exam syllabus aspirants must try scoring the maximum marks here to improve their overall scores.

Thus, to help candidates with their Government exams preparation, given below are a few sample questions which will help them apprehend the standard of the examination and analyse the type of questions which may be asked.

Q 1. Routers work at which layer of the OSI Model?

Q 4. _______ layer defines how data is formatted, presented, encoded, and converted for use on the network.

Q 5. How many layers are there in the Open Systems Interconnection (OSI) model?

Q 6. Which is the first layer of the OSI Model?

Apart from Computer Knowledge, other subjects are also included in the competitive exam syllabus. Candidates can get free sample questions and previous year papers for the various Government exams at the links given below:

Also, Government exam aspirants can get the best Preparation Strategy for Competitive Exams at the linked article. Here they can find the best preparation tips, study material and exam information for the upcoming exams.

For any further update or notes on the various topics included in the exam syllabus, candidates can turn to BYJU’S for assistance.

Q 2. What is the purpose of an OSI Model?

Ans. The purpose of an OSI Model is to describe the functions of a networking system. It defines a hierarchical structure of conversion of raw data to processed information through the different layers.

Q 3. What are the different layers of the OSI Model?

Ans. There are 7 layers of the OSI Model:

Q 4. What is the difference between the OSI Model and TCP/IP Model?

Ans. The TCP/IP or the Transmission Control Protocol/ Internet Protocol is a communication protocols suite. On the other hand, the Open Systems Interconnection is a conceptual framework, using which the functioning of a network can be described. To know more visit the TCP/IP vs OSI Model page.