Difference Between TCP/IP and OSI Model

The TCP/IP or the Transmission Control Protocol/ Internet Protocol is a communication protocols suite using which network devices can be connected to the Internet. On the other hand, the Open Systems Interconnection or OSI Model is a conceptual framework, using which the functioning of a network can be described.

In this article, we bring to you a tabulated difference between the TCP/IP model and the OSI model. This will help candidates prepare themselves and upgrade their Computer Knowledge for the upcoming competitive exams.

Candidates can also visit the links given below and learn more about the other important computer-related terms and applications for UPSC exam: 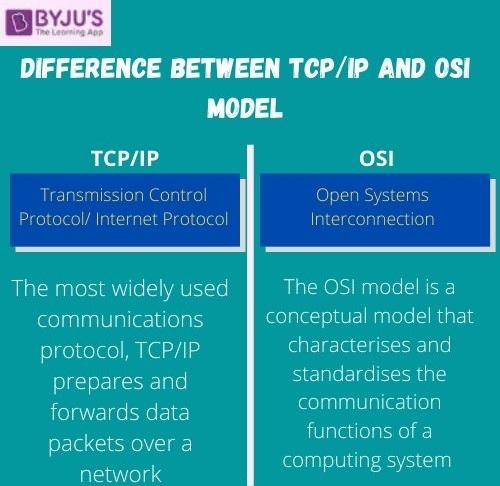 Given below is a tabulated comparison between the two models of networking, the TCP/IP and OSI model. Candidates must carefully go through the following key points of difference between the two.

The above points of comparison display the difference between the TCP/IP and OSI models efficiently.

However, there are few similarities between the two which are as mentioned below –

Similarities between the TCP/IP and OSI models

To learn more and to get 100+ difference between articles from various subjects and fields included in the UPSC syllabus, candidates can visit the linked article.

Furthermore, to get the latest exam updates, the best study material and a suitable preparation strategy, candidates can visit BYJU’S.

Q 1. What is the main difference between TCP/IP and OSI Model?

Ans. TCP/IP Model is a communication protocols suite using which network devices can be connected to the Internet. On the other hand, the OSI Model is a conceptual framework, using which the functioning of a network can be described.

Q 2. TCP/IP vs OSI: What are the different layers?

Ans. There is a separate layer for Data Link and Physical in the OSI Model, whereas, the TCP/IP has a single Network Interface layer for the same. Similarly, there is Application, Presentation and Session layers in OSI, which are combined into one layer (Application) for TCP/IP.