A computer device is made up of various elements which help in its effective functioning and processing. There are five basic components of the computer which help in making this processing of data easier and convenient.

In this article, we shall discuss the basic computer components along with their functions. Also, for candidates preparing Computer Knowledge for upcoming competitive exams, sample questions based on this concept have been given further below in this article.

By definition, components of a computer system are the primary elements which make the functioning of an electronic device smooth and faster. There are five basic components which include:

To have a better understanding of the Fundamentals of Computer, visit the linked article.

The exterior of any computerised device may look different and may also have varied features, but the basic components remain the same for their functioning.

Since the computers (in various forms) have become a part of everyday life, understanding these components of a computer system is important for everyone. As for Government exam aspirants, questions based on these may be asked in the form of multiple-choice questions in the final exam. Thus, preparing yourselves accordingly is also important.

5 Components of a Computer System 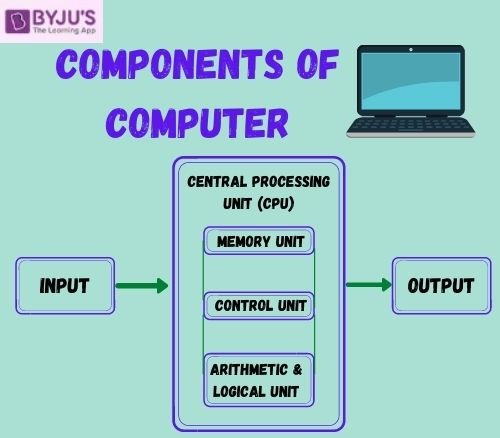 Given below are the 5 components of a computer along with their purpose and functions.

A computer will only respond when a command is given to the device. These commands can be given using the input unit or the input devices.

For example: Using a keyboard we can type things on a Notepad and the computer processes the entered data and then displays the output of the same of the screen.

When we command a computer to perform a task, it reverts for the action performed and gives us a result. This result is called output. There are various output devices connected to the computer. The most basic of which is a monitor. Whatever we write using a keyboard or click using a mouse, is all displayed on the monitor.

Thus, the output unit gives us the final result once the entire processing is done within the mechanism of a device.

For example: when we visit an ATM, we enter our details like language, pin, amount to be withdrawn, etc. and then the final money which the cash dispenser releases is our outcome. In this case, the cash dispenser acts as an output unit.

To get a list of computer input and output devices and the function of the various I/O devices, visit the linked article.

For better understanding and more interactive analysis of the components of the computer, candidates can check the video given below and get detailed information reading the five major components responsible for the functioning of a computer device. 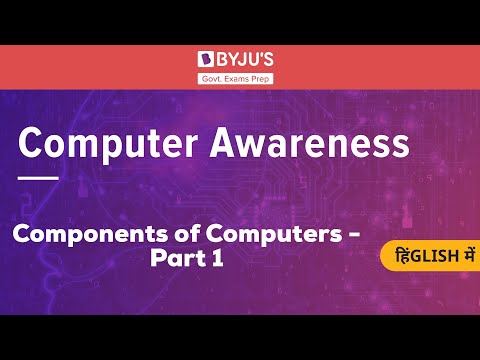 When we enter the data into the computer using an input device, the entered information immediately gets saved in the memory unit of the Central Processing Unit (CPU). Because of the presence of some existing programming, the Memory Unit transmits the data further to the other parts of the CPU.

Similarly, when the output of our command is processed by the computer, it is saved in the memory unit before giving the output to the user.

The Control Unit collects the data entered using the input unit, leads it on for processing and once that is done, receives the output and presents it to the user. It can be said to the centre of all processing actions taking place inside a computer device.

Basically, the instructions taken, interpretation of entered data, issuing signals to execute the data and then finally retrieving the data is all done in the Control Unit.

As the name suggests, all the mathematical calculations or arithmetic operations are performed in the Arithmetic and Logical Unit of the CPU.

It can also perform actions like a comparison of data and decision-making actions. The ALU comprises circuits using which addition, subtraction, multiplication, division and other numerical based calculations can be performed.

The Central Processing Unit is the core of any computer devices. It comprises three major components of the computer which have been discussed above:

All these three units are elements of CPU and together help in the efficient working and processing of data. It is also known as the “Brain of Computer” and no action can be conducted by a device without the execution and permission of the Central Processing Unit.

The device is a close-knit circuit comparison microprocessor which helps in fetching the data and proving suitable results to the user. Thus, CPU is the main processing unit of the computer.

Also, while discussing the various components of computers, it must be known that a device which is so complex and intricately made using circuits and wires comprises various other elements, which affects its overall programming and performance.

Given below are a few difference between articles with regard to Computer Awareness and will help in better understanding of the varied computer terms, programs and applications:

Components of Computer Questions and Answers

As discussed earlier, major Government exams in the country include Computer Knowledge as a key subject in the exam syllabus. Thus, being well prepared and well aware of the basic computer elements is mandatory in such cases.

So, to assist candidates with their competitive exam preparation, given below are a few Multiple Choice Questions on Components of Computer for aspirants to apprehend the type of questions which may be asked.

Q 4. A computer comprises how many types of memory?

Solution: A computer comprises two types of memory. One is Random Access Memory (RAM) and the other is Read Only Memory (ROM)

Q 5. Which of the following are the physical parts of a computer?

It is important to know that since the syllabus is exhaustive, it is important to have a suitable study plan and correct approach to excel in these Govt exams. Thus, for the best Preparation Strategy for Competitive exams, visit the linked article.

For any further updates, study material or exam information, turn to BYJU’S for assistance.

The continued part of the ‘Components of Computer’ video is given below. Refer to it for the detailed explanation on this topic from the Experts. 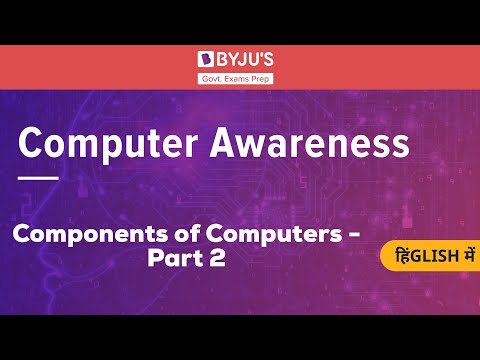