Difference Between Compiler and Assembler

Both these terms are relevant in context to program execution. The compiler considers the entire code and one and converts it at the same time. Whereas, the assembler, converts the code line by line.

In this article, we bring to you a detailed comparison between a compiler and an assembler. Candidates can also know more about the various High-Level Computer Languages at the linked article. 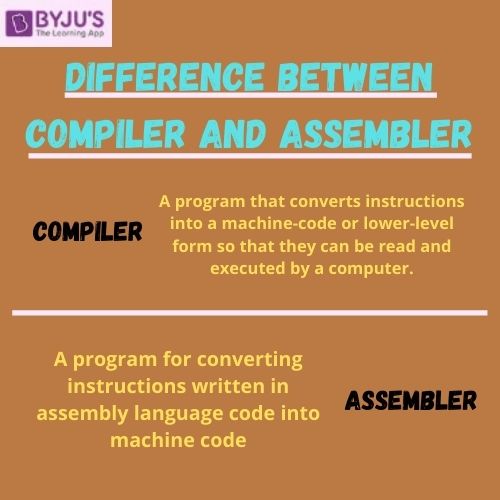 This difference between compiler and assembler will help UPSC aspirants prepare for the upcoming IAS exam, as questions based on Computer knowledge are frequently asked in the Science and Technology Section of the examination.

To strengthen their Computer Knowledge, candidates can refer to the following links and learn more about the related terms, applications, and software, etc.

Both, compiler and assembler are used to convert one type of language coding into another and this is mainly the only similarity between the two. However, the two are different from each other in various other aspects.

Given below is a tabulated comparison between a Compiler and Assembler for the reference of candidates:

As discussed earlier, computers are a part of the Science and Technology section of the Civil Services Exam syllabus. Thus, candidates can get notes regarding the same at the UPSC Notes: Science & Technology page.

Also, apart from the difference between compiler and assembler, there are various other computer-based articles, which can candidates can refer to simply their concepts and understanding:

Aspirants can also get 100+ difference between articles based on the different sections and syllabus of UPSC exam, at the linked article.

What is function of assembler and compiler?

How does a compiler work?

Compilers are utility programs that take your code and transform it into executable machine code files. Next, the compiler works through the preprocessed code line by line translating each line into the appropriate machine language instruction.

To get a general exam pattern and to know the detailed UPSC Syllabus, candidates can visit the linked article.

Also, to get the latest exam updates, preparation tips and study notes at BYJU’S.