2.Aditya gets ready to gaze at the sun

1.Why Siachen must be demilitarised • The prohibition was necessary to keep the Internet open and non-discriminatory.

• TRAI said a fine of Rs. 50,000 would be levied per day, subject to a maximum of Rs. 50 lakh, for any violation of these regulations by the service providers.

• An exemption, however, has been made for offering emergency services.

• The regulator and Facebook have been at loggerheads over the issue with the authority terming the social networking giant’s attempt to lobby for its Free Basics initiative a “crude” attempt at turning the consultation over differential pricing of data services into an “orchestrated opinion poll” on Free Basics.

• Net Neutrality activists see it as a positive indication for future regulations on issues such as regulation of over the top applications such as WhatsApp and Skype.

• India and the United Arab Emirates are set to strengthen cyber security mechanism to track radicalisation of youth in South Asia and West Asian region.

• Over the last several months, India-UAE cooperation has prevented several radicalised youths from joining the ranks of the Islamic State (IS).

• Cyber security experts have pointed out that the cooperation between the UAE and India on cyber security has helped in tracking radicalisation in India as well as inside Pakistan.

• Agreements on security and cyber security will be part of a total of 16 agreements that are expected to be signed during the visit which will also include an agreement on nuclear research and development, and aerospace collaborations.

• The delegation expressed their interest in investing in healthcare infrastructure that Smart City projects aspire to build.

• Mr. Modi and Mr. Cameroon had agreed to support opening of 11 Indo-UK Institutes of Health in India with an investment of £1 billion.

• Later, Mr. Naidu met another delegation of U.S. businessmen and assured them that Special Purpose Vehicles (SPV), one of the key administrative bodies for Smart Cities, would be given ample powers to ensure timely execution of smart development projects.

• As a result, heavy police presence, guarded convoys, new checkpoints and troop reinforcements have turned parts of the southern port city of Gwadar into a fortress.

• Securing the planned $46 billion economic corridor of roads, railways and pipelines from northwest China to Pakistan’s Arabian Sea coast is a huge challenge in a country where Islamist militants and separatist gunmen are a constant menace.

• Gwadar skirts the tribal belt along the Afghan-Pakistan border where Islamist militant groups including the Pakistan Taliban and al Qaeda have long been based. • China is “deeply concerned” about the decision by the United States and the Republic of Korea (ROK) to start official negotiations on the deployment of the Terminal High Altitude Area Defense (THAAD) system.

• Analysts say that each THAAD missile battery would cost $1.3 billion and will be capable of covering half or two-thirds of South Korean airspace.

• Washington is of the view that following North Korea’s nuclear test in January, the THAAD system would be required to protect the 27,000 American troops that have been deployed in South Korea. 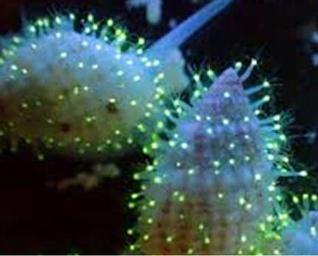 • Scientists have discovered a new species of luminous creatures in the Red Sea, living in colonies as garlands of ‘fluorescent lanterns’ and emitting a green glow.

• They found “fluorescent lanterns,” that were very similar to hydrae.

• Sea hydroids, unlike hydrae, are often found in colonies and can branch off tiny jellyfish.

• The researchers suggest that glow around the mouth of polyps may attract prey.

• Fluorescent proteins are widespread among the corals Anthozoa and hydroid jellyfishes

2. Aditya gets ready to gaze at the sun

• Aditya-L1 is the Indian Sun mission due after three years.

• Aditya is the nation’s third big extra-terrestrial outing after Moon and Mars. All these missions have been conceived and designed by ADCOS, a multi-faculty body of ISRO.

• To build a few ultra-sensitive instruments that can accurately measure minute details about the Sun.

• To create an all-aluminium, 20-metre high magnetic test facility near Bengaluru to specially assemble and test the spacecraft and instruments in a magnetically clean manner.

• The imposition of Minimum Import Price (MIP) on steel products has not only brought relief to domestic steel makers, but has also cheered banks, which have a heavy exposure in the sector.

• In the larger interest, the steel industry needs to grow because per capita steel consumption in India still is quite low.

1. Why Siachen must be demilitarised

Category: Security challenges and their management in border areas

• The February 3 avalanche on the Siachen glacier that buried 10 Indian Army soldiers is a stark reminder to both India and Pakistan about the cost of military deployment in such inhospitable territory.

• This was not an isolated incident but part of a growing trend in that region, as global warming dramatically affects the glacier.

• Avalanches are a threat not just to Indian soldiers, but also to the Pakistani troops.

• It is not just avalanches; the challenging terrain of the glacier and its surroundings as a whole have been regularly claiming lives.

• Ever since the two militaries began a costly engagement on the glacier, there have been numerous efforts by both countries to find a way to demilitarise the glacier.

• In June 1989, they came very close to clinching a final deal. Ever since then, India and Pakistan have tried diplomatically to find away to demilitarise the region. However, a lack of political will on both sides has meant that the status quo holds, and soldiers continue to pay a very high price.

• India has in the past suggested delineation of the Line of Control north of NJ 9842, redeployment of troops on both sides to agreed positions after demarcating their existing positions, a zone of disengagement, and a monitoring mechanism to maintain the peace.

The demilitarisation of Siachen is definitely doable. This is not only because it is diplomatically possible, but also because there is a critical mass of opinion in both India and Pakistan that neither can sacrifice, or put in harm’s way, so many lives on the inhospitable glacier.

If the initiative is not seized by both sides now, the vagaries of nature will continue to exact a toll on forces deployed in Siachen, even if peace holds.

a. Specific Limitations on Trade

b. Customs and Administrative Entry Procedures

a. Aditya-L1 is a spacecraft whose mission is to study the Sun

b. It has been designed and will be built in collaboration between Indian Space Research Organisation (ISRO) and NASA

c. This will be the first Indian space mission to study the Sun

d. None of the Above.