2. Train to Tehran will take Silk Road into West Asia

1.Zika could infect 4 mn people: WHO

2.We should be careful about how we measure GDP: Rajan 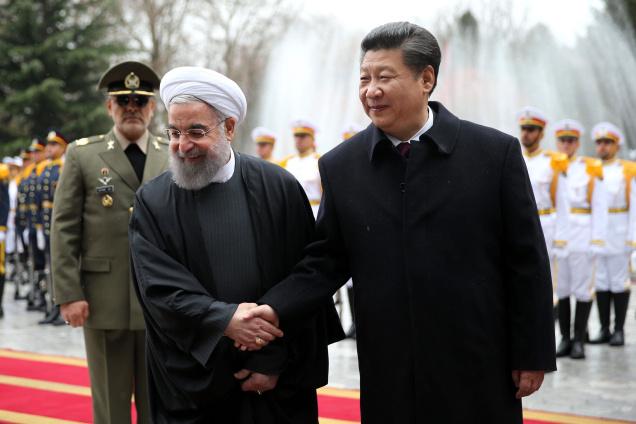 For decades, China remained on the sidelines of West Asia countries geopolitical calculus.

Even in the years where the China rose as an economic powerhouse, the cornerstone of its engagement with West Asia, has focused on non-interference.
China built ties with West Asian nations based on three principles- secure energy supplies, expand markets for finished goods, and find investment opportunities.
In recent years, Beijing has been more active in global diplomacy concerning the region (Iran nuclear deal); she has taken strong positions at the UN (Syria vetoes); and has had a naval exercise with Russia in the Mediterranean.

2. Train to Tehran will take Silk Road into West Asia

It will exit China through Alataw Pass in China’s Xinjiang province, and then pass through Kazakhstan and Turkmenistan before heading to Tehran.

Further, students are advised to go through the below video which will throw light on India- Iran relations.

1. Zika could infect 4 mn people: WHO

Topic: Science and Technology
Category: Health, Bio-technology
Location: The Hindu, Page 14
Key Points:
The Zika virus is mosquito-borne. The World Health Organization (WHO) expects the Zika virus to spread through the Americas and effect between three million and four million people.

2. We should be careful about how we measure GDP: Rajan

He cited the example of two mothers who babysit each other’s kids and said that there is a rise in economic activity as each pays the other, but the net effect on the economy is questionable.

Economists have criticized the new GDP series as the picture presented by the GDP numbers does not corroborate real economic activities such as corporate profitability or bank loan growth.

Topic: Geography (GS1), Economy (GS3), Governance
Category: Urbanization Issues, Urban Development
Location: The Hindu, Page 1
Key points:
• The Government announced the list of 20 cities that have qualified to build smart infrastructure with Rs. 200 crore each from the Central government’s first phase of funding.
• Mr. Naidu said the government would soon introduce the credit rating system for cities so as to attract foreign investors.
• With an aim to achieve “inclusive growth”, the mission promotes integrated city planning, where the government’s policies such as Swachh Bharat Mission and Atal Mission for Rejuvenation and Urban Transformation complement each other.

Topic: Economy, Paper III
Category: Developmental Economics, Asian Development Bank
Key points:
• Asian Development Bank (ADB) has signed a $80-million loan agreement with the Centre to help continue improving infrastructure in the two North-Eastern state capital cities of Agartala and Aizawl.
• The loan is the third tranche of a $200-million financing facility under the North Eastern Region Capital cities Development Investment Programme.
• This will be used for investment in water supply, solid waste management and sanitation in Agartala and Aizawl.

• The Centre needs to frame guidelines to facilitate licensing arrangements between companies to bring critical drugs into the country, according to Cipla Chairman Dr YK Hamied.
• “If companies are unable to get licences for drugs under monopoly, the Government of India should intervene on behalf of the country for a non-exclusive compulsory licence with a fixed royalty to the innovator, so that patients are not denied life-saving medicines,” he said.
• The recent in-licence agreement on a hepatitis-C drug was voluntarily given to 11 drug companies in India on a suitable royalty payment. As a result, the drug sold in the US at $1,000 per tablet is available here at between $4 and $7 per tablet, he told the IDMA gathering.
• The enactment of the Indian Patent Act, 1970 in September 1972, was a turning point for the industry, he observed. India had abolished product patents and preserved only process patents in health, food and agriculture. As a result, the domestic pharma industry could legally manufacture and market medicines within the country and internationally.
• This is an example of a good equilibrium between access and rewarding innovation, he said, referring to the alliance between Gilead and several Indian companies including Cipla on hepatitis C drug sofosbuvir.

Key Points:
There is an absence of an effective regulatory or grievance-redress mechanism in India’s higher education sector.
There is no dearth of regulatory agencies governing colleges. For example, a private institution can be established only after multiple clearances. These include ‘no objection’, approval from apex bodies such as AICTE and the MCI, etc.
Today, colleges have proliferated and regulatory agencies lack the capacity to physically inspect institutions. They undertake only random on-site inspections. Many universities grant affiliation if a college fulfills even 60% of the stipulated requirements.
Thus, unscrupulous colleges take advantage and submit fabricated records to obtain approvals. Cases abound in the country where ghost faculty members are employed, and teachers, laboratory equipment, furniture, etc. are rented during inspections.
Conclusion: What is needed is not only the strengthening of regulatory systems but also the appointment of academicians with uncompromising integrity to head regulatory bodies and universities.

ii. One Belt, One Road initiative

i. Mosquitoes can act as a vector.

iii. The World Health Organization (WHO) expects the Zika virus to spread through the Americas and effect between three million and four million people

ii. The “Belt” is a network of overland road and rail routes, oil and natural gas pipelines, and other infrastructure projects that will stretch from Xi’an in central China through Central Asia and ultimately reach as far as Moscow, Rotterdam, and Venice.

iii. The “Road” is its maritime equivalent: a network of planned ports and other coastal infrastructure projects that dot the map from South and Southeast Asia to East Africa and the northern Mediterranean Sea.