2. Getting Closer to Smart Cities

– The energy sector that includes electricity production, fuel combustion in industries, and transport continues to be the biggest contributor to India’s emissions.

– India is the third largest emitter of greenhouse gases after China and the US. It becomes the fourth when European Union is considered as one block. But it has a much lower per capita emission as compared to the other countries. – India is set to import more crude oil from Nigeria, already one of the biggest contributors to the country’s oil imports 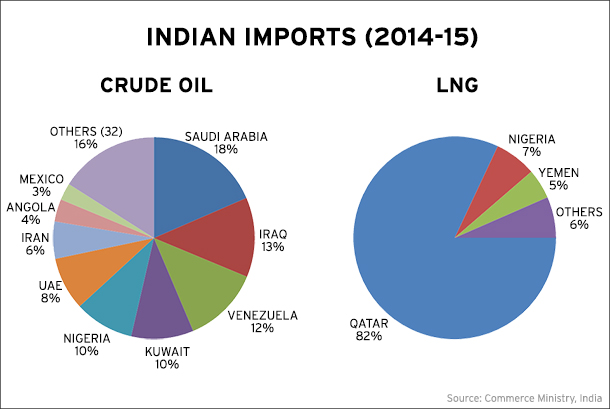 – Nigeria is the third-largest contributor to India’s oil imports, accounting for 11.59 million tonnes (MT) in the first half of this financial year, behind Saudi Arabia (19.56 MT) and Iraq (17.01 MT).

– The benefit of a term contract is that not only does it assure a certain quantity to be supplied but also ensures a stable price unlike oil bought from spot markets whose price can fluctuate drastically. Apart from Nigeria, Sudan also wants to increase its engagement with India.

– Sudan currently owes India $240 million for the oil it consumed from the Greater Nile Oil Project in the country of which OVL owns 25 per cent. The modalities of repayment are being worked out

– India, on its part, is also keen to diversify its oil import basket as Saudi Arabia’s national oil and gas company recently announced that it would be selling oil to its Asian customers, including India, at a premium of $0.6 a barrel above the prevailing market price in February.

– A better understanding of Pakistan’s own security concerns could help policymakers in India frame a stable engagement strategy with its most important neighbour of the day. Pakistan’s security strategy is built around a perceived existential threat from India.

– According to its narrative, since the birth of the two countries in 1947 India has been an aggressor on at least three occasions, dismembered it, humbled it militarily repeatedly, built nuclear bombs that can wipe it off the map, and has been subjecting Kashmiris to humiliation.

– Pakistan today spends a quarter of its tax collected on the military in some form or the other. The Pakistan Army is not just an armed military service, but it also runs businesses and the nation itself. While it has carried out repeated assaults on Pakistan’s democracy, it is also the only institution capable of holding Pakistan together.

– Organisations such as Lashkar-e-Taiba and Jaish-e-Mohammad were created and nurtured by the very same Pakistan Army and the intelligence agency, Inter-Services Intelligence (ISI). These groups continue to serve a critical function at the core of the army’s security doctrine, of fighting for the Kashmir cause, of checkmating the much bigger Indian military, and keeping its neighbour occupied on various fronts.

– Pakistan Army leadership finally is waking up to the armed non-state actors biting back.. but the terror groups are very still effective in unsettling India

1. Getting Closer to Smart Cities

– Twenty cities will be selected on January 26, 2016 and become the first lot of cities on their way towards being “Smart”.

– Concerns: Usually, it takes 20 to 30 years to build a city while a Smart City has only five years to shape up with available resources.

– Most of the problems in implementation will surface at municipal level. Most Indian Urban Local Bodies (ULBs) have three constraints — lack of sufficient financial, technical capacity and talented manpower.