– U.S  removed a wide range of sanctions against Iran after the International Atomic Energy Agency (IAEA) confirmed that Tehran had met its commitments to roll back its nuclear programme, under an agreement with China, France, Russia, the U.K., the U.S. and Germany on July 14 last year.

– The removal of restrictions on its oil, petrochemicals, banking, natural gas and port sectors will hugely benefit Iran and allow it to reenter the global market

– Chabahar port, IPI gas pipeline: The removal of sanctions will tremendously help India’s plans in Iran, which are many and include the Chabahar port, an Indian Oil petrochemical plant and the proposed Iran–Pakistan–India (IPI) gas pipeline. 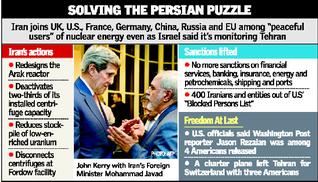 Assignment: Read up on the endosulfan incident and summarize.

– Section 295(A) of the IPC is in urgent need of amendment to limit its misuse. As is the section dealing with sedition, freely imposed by the state on folk singers, cartoonists, students watching cricket and defiant political upstarts.

– The finance ministry has stressed that it will stick to the path of fiscal consolidation.  = Tight Fiscal Policy. Good.

– The sharp decline in global commodity prices and the slowdown in demand in the domestic economy have reduced inflationary pressures + fiscal consolidation = scope for easy monetary policy. Try?

– There has been renewed focus on reaping the benefits of digitisation on the part of the government, with recent initiatives such as Digital India and Jan-Dhan Yojana (JDY) attempting to bring the marginalised and unbanked to the fore, particularly through the use of technology.

– A total of 196 million bank accounts have been opened and 167 million RuPay cards have been issued under the latter, indicating the large unmet demand for banking services.

– The JDY forms the core of the government’s strategy—with a bank account, every household could potentially gain access to banking and credit facilities and participate in the formal system.

– Plus, Reserve Bank of India’s (RBI) decision to grant licences to 11 payments banks in August 2015—the first instance of differentiated licensing in India’s banking history.

– Intense competition and innovation, resting on the backbone of the ongoing digital revolution, is set to benefit consumers and help achieve broader policy goals of financial inclusion

2.Freedom of speech and expression is absolute within territory of India

3. Restrictions are realted to hate speech, sovereignty and integrity of the country and defamation

2. Under Section 5 (B) of Banking Regulation Act, 1949, banking means accepting, for the purpose of lending or investment, deposits from the public, repayable on demand and withdrawable by cheque and draft

3. Differentiated banks like payments banks will provide a limited range of products such as acceptance of demand deposits.

a) it is an international organization that seeks to promote the peaceful use of nuclear energy, and to inhibit its use for any military purpose, including nuclear weapons

b) was established as an autonomous organization in the 1980s

c) it reports to the European Union, the United Nations General Assembly and Security Council.

d) it has never received a Nobel peace Prize