1. In a first, all-woman naval team to go around the world under sail

2. Sugar tax may be the bitter pill to cut obesity

1. In a first, all-woman naval team to go around the world under sail

Topic: Indian Society
Category: Women Empowerment
Location: The Hindu, Page 11
Something to be proud of 🙂 women empowerment in India Key Points:
What is Euthanasia?
It means ‘good death’
It is and assisted suicide, when there are no chances of recovery of the terminally ill-patient.
Types :
Passive : When medical treatment is withdrawn with the deliberate intention of causing death to free the person from an unending pain
Active : It is an intentional act to deliberately kill a terminally ill patient
You can understand the difference like this : If a person has been provided with the possible treatment and still is not recovering, has no chance of recovering and is in acute pain, can be allowed to die through passive euthanasia. In case he was on a ventilator, the ventilator is removed. This is passive euthanasia.
However, if a terminally ill patient is made to die by doing an act, like administering a particular drug for the patient to die.

2. Sugar tax may be the bitter pill to cut obesity

Topic: Social Justice
Category: Health
Location: The Hindu, Page 12
Key Points:
WHO recommends taxation measures to rein in consumption of unhealthy food
This unhealthy food is the reason for the burgeoning number of overweight and obese children younger than 5 years
Stats : In 2014, 41 million children in this age group were either overweight or obese across the world
National Family Health Survey (2014-15) : the percentage of men and women with obesity in India had increased sharply
Although, national accurate estimates of childhood obesity in India are not available, however, a national survey is to be undertaken by UNICEF from March this year will cover children in the age group of 0-19 across all 29 states
India faces a double whammy of obesity and underweight/wasted children
Example : Mexico, has demonstrated that a significant reduction in consumption can be achieved through taxation

Topic: Social Justice
Category: Health
Location: The Hindu, Page 14
Key Points :
Challenges in implementing UHC : knowledge gap among policy makers and general unwillingness for change – as stated by former director general of health service
India will be undertaking the universal health care under the National Health Assurance Mission (NHAM)
Government spending on health, the contradictions : current spending is 1.04% of the GDP while the National Health policy aims at 2.5% by the end of the 12th Five-year plan
Under the sustainable Development Goals of the UN, India has signed up to keep pace with the global movement towards Universal Health Coverage
Goal can be said to be achieved : When the citizens are able to access quality and affordable healthcare services without being pushed into ‘catastrophic healthcare expenditures’, driving them into poverty
Do read it along with the yesterday’s article on Universal health coverage by WHO:
‘WHO unit to focus on achieving universal health coverage’ 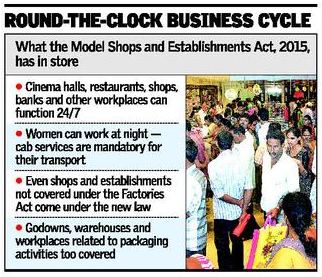 The bill, if enacted, will act as an advisory to the states
All units which employ 10 or more workers are proposed to come under this act
Government claims that they have protected the workers’ rights while framing the law
It will boost : a. services sector b. ease of doing business
the law will not apply to government offices and the Reserve Bank of India

Topic: International Relations
Category: International Law, Human Rights
Location: The Hindu, Page 16
Key Points :
The government based in the Marshall Islands capital of Majuro said by not stopping the nuclear arms race, the countries continued to breach their obligations under the Nuclear Non-Proliferation Treaty (NPT) — even if the treaty has not been by signed by countries such as India and Pakistan
The Marshall Islands will seek to persuade the The International Court of Justice to take up a lawsuit against India, Pakistan and Britain which they accuse of failing to halt the nuclear arms race
The International Court of Justice (UN’s highest court) was founded in 1945 to rule on legal disputes between nations