Candidates can get the latest RRB Notifications from the linked article.

Witnessing the massive outbreak of Coronavirus (Covid-19) many Government institutions and exam conducting bodies have either cancelled or postponed the recruitment examinations.

The table given below will put some light on the main RRB exams scheduled to happen this year but got postponed in the view of the emergent situation of Coronavirus in India.

This article will give you all the important information about the upcoming railway exams such as RRB exam dates, RRB Eligibility, RRB Notification, RRB Admit Card, etc.

RRB Exam Calendar 2019-20 for the upcoming railway exams like RRB NTPC, ALP, JE Exam is given below:

The various details included in the RRB Recruitment notice are related to RRB posts, vacancies, and salaries.

The Railway entrance examinations are held for the selection of technical and non–technical cadres in the Indian Railways. Details regarding all the examinations conducted by the Railway Board are given in RRB official Website (http://www.rrbcdg.gov.in/).

Thousands of RRB Vacancies for different RRB Exams are announced every year to recruit eligible candidates to work in the Indian Railways. Know the detailed information on RRB Vacancy in the linked page.

Also, aspirants for Railways exam must visit the National Recruitment Agency page. NRA shall soon be responsible for conducting a Common Eligibility Test (CET) for posts under SSC, RRB and IBPS. This common test will help in appointing candidates at Non-Technical and Non-Gazetted positions in the three Organisations.

In this article, the following RRB Exams are discussed:

The exam date for Railway NTPC is scheduled from December 15th 2020 onwards. Candidates appearing for NTPC exam this December can take Free RRB NTPC Online Live Course to give a boost to their preparation. RRB official website will give detailed information related to RRB exam date of NTPC soon.

Earlier, the Railway Board has released a notice and invited open E-tenders for exam conducting agencies so that the computer-based tests of RRB NTPC 2019 exam can be conducted in 2020.

The last RRB exam update on NTPC recruitment is regarding the addition of 66 vacancies for the visually impaired candidates, thereby increasing the total number of posts to 302. Check RRB NTPC Eligibility criteria for different category candidates.

The RRB Recruitment for the Non-Technical and Popular Category exam will fill a total number of vacancies close to 35208. Aspirants of RRB Exam NTPC can check RRB NTPC Previous Year Question Paper for better preparation.

The RRB NTPC Recruitment information for 2019 exam is given below:

For more details on the same, refer to the RRB NTPC Notification.

The details of RRB exam for ALP recruitment 2019-2020 is not yet released by the Railway Board. For further information refer to the RRB ALP Notification.

Aspirants can refer to the recruitment details for the 2018-19 exam to get an idea on the same.

As per the RRB, the number of vacancies indicated in the notification are provisional and may increase or decrease or even may become NIL in total or in specific communities/posts/units at a later stage depending upon the actual needs of the Railway Administration.

The RRB ALP Recruitment 2018-19 details are given below:

The RRB has kept an average pay of Rs 19,900/- after the 7trh Pay Commission matrix.

You can also refer RRB result for various Railway Recruitment Board exam results.

The Railway Recruitment Board Exam for Junior Engineer selects candidates for various technical posts in the Indian Railways.

The RRB has announced a total of 12487 vacancies for the RRB Exam Junior Engineer 2019.

For more details on RRB JE Recruitment, refer to the linked article. 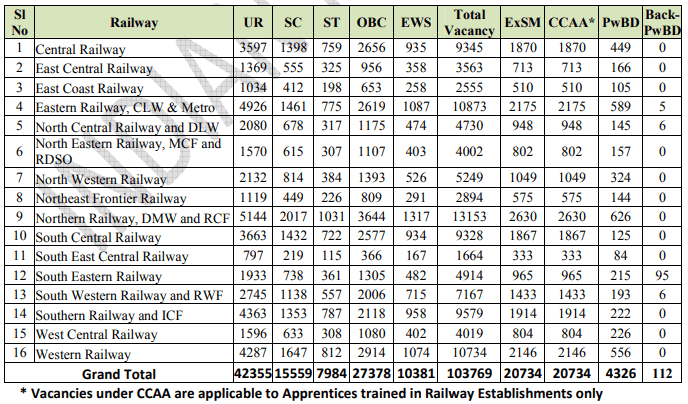 In this section, the relevant exam dates of different examinations conducted by the Railway Recruitment Board is highlighted.

The official RRB Notification for the NTPC 2019 exam has been published by the railway board.

The important RRB exam dates for the NTPC 2019 are as follows:

The 2019-20 RRB ALP official notification is yet to be released by the Railway Recruitment Board.

The important dates for 2019-20 are also to be published by the Board.

The RRB JE Exam dates for 2019 are given below:

In this section, a brief idea about the RRB Exam pattern for various exams is discussed. The Railway Recruitment Board sets the exam pattern and syllabus of all the examinations held by it.

The RRB exam pattern for various exams is given below.

The RRB Exam Pattern for NTPC is as follows:

The RRB JE Exam pattern is given in brief below:

The exam pattern of CBT Stage – II is given in the table below:

Candidates should regularly visit the official website of RRB for any changes related update on RRB JE exam.

The four stages of RRB Group D Exam pattern are:

The detailed exam pattern of RRB Group D exam is given in the syllabus page, the link for the same is given below.

The Syllabus for RRB exams gives the complete idea about the important topics covered for various exams conducted by the RRB.

The RRB NTPC syllabus has the following topics:

Candidates can refer Static GK page for general awareness preparation, the link for the same is given above.

The RRB Exam NTPC Syllabus is given below:

For detailed RRB NTPC Syllabus, refer to the linked article.

The RRB ALP syllabus is given below:

For detailed RRB ALP Syllabus, refer to the linked article.

The RRB Exam JE syllabus is given below in brief:

For more topic related details with regard to the RRB JE Syllabus, refer to the linked article.

To know more about RRB Syllabus, refer to the linked article.

The RRB Group D Syllabus as prescribed by the Railway Board is as given below: 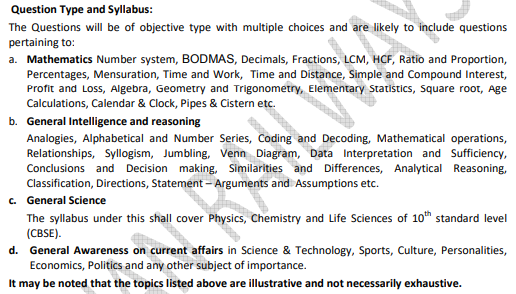 The RRB Exams Eligibility determines the number of candidates who can write the RRB Exams.

The RRB Eligibility criteria are different for various RRB examinations.

The RRB NTPC Eligibility Criteria, which is set by the Railways Recruitment Board, is as follows:

The table gives a brief idea about the RRB NTPC Eligibility:

For more details on the RRB NTPC Eligibility and age relaxation, refer to the linked article.

The table gives a brief idea about the RRB ALP Eligibility:

For more details on the RRB ALP Eligibility and age relaxation, refer to the linked article.

For more details on RRB JE Eligibility, refer to the linked article.

Steps for RRB Exam online application is given below:

Further details can be checked on the RRB Apply Online page.

The RRB Exams Admit Card usually releases one month before the exam.

The RRB Admit Card details for the various exams conducted by the Railway Recruitment Board is as follows:

For the RRB NTPC Stage I, the exam is scheduled to take place tentatively in September/October 2020.

The important RRB NTPC Admit Card details are as follows:

For details on downloading RRB NTPC Admit Card, refer to the given link.

The RRB ALP Admit card details for the 2019-20 exam has not yet been released.

The important RRB ALP Admit Card details for 2018-19 are as follows:

For details on downloading RRB ALP Admit Card, refer to the linked article.

The RRB Group D Admit Card details and notification for the 2020 exam has not yet been released, therefore, the admit card dates for the latest recruitment process of Group D exams are given for reference.

Important dates for RRB Group D 2019 Admit Card are as mentioned below:

The Railway Recruitment Board has announced a total of 13487 vacancies for the Junior Engineer category.

It is to be noted that the RRB JE CBT Stage I exam was scheduled to take place in April – May 2019.

Candidates can check important dates of the RRB JE Admit Card in the table given below:

For more details on the RRB JE Admit Card, refer to the linked article.

The RRB Exam is one of the most sought-after exams conducted by the Railway Recruitment Board.

Candidates trying for various posts under the Indian railways can appear this exam. The RRB Exams need a lot of preparation to score well.

The top 5 RRB Preparation tips are given below:

Candidates trying to get into these posts can appear for the various RRB Exams like RRB NTPC, RRB ALP, RRB Group D and RRB JE.

The official website of Railway Recruitment Board is www.rrbcdg.gov.in/

Q 1. What are some good RRB books to prepare for the Reasoning section?

Ans. RRB books for reasoning section are as follows:

Q.2. What are topics covered in RRB Syllabus?

Ans. The common subjects covered in RRB Syllabus are English, Reasoning, Quantitative Aptitude, and General Awareness. However, RRB exams require candidates to be well versed in professional subjects as well.

Q.3. Which language is used in the RRB exam?

Q.4. What is the RRB exam Age limit eligibility conditions?

Q 5. How can a candidate apply for upcoming railway exams in the year 2020?

Ans. Aspirant have to follow the steps given below to apply for upcoming railway exams in 2020:

Ans. Candidates willing to appear for any of the RRB exams can find all the small and big news related to Railway Recruitment Board exam on the RRB official Website.