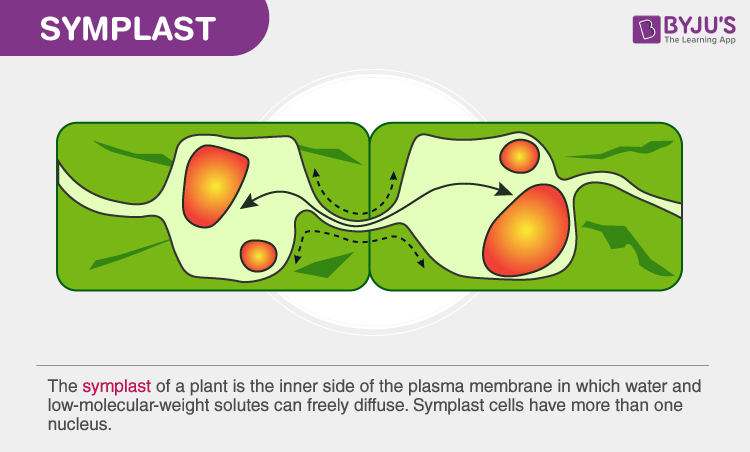 Like all animals and humans, plants do require water to survive and to complete their day-to-day biological processes. In all plants, water plays a vital role in germination, photosynthesis, transpiration and in the transportation of nutrients from roots to other parts of the plants. Root absorbs the water through its hair and then it is supplied to xylem vessels of the plant with the help of these three pathways.

Xylem: It is involved in transporting water and other low-molecular-weight solutes from the roots to the upper surface of the plants.

Phloem: It is involved in transporting prepared food from the leaves to other parts of the plants.

The main mechanism involved in the movement of water in plants would begin with water from the soil entering the plant from the root hairs and continuing to flow from other root cells into the xylem.

Symplast is the protoplasts present in plants, which are interconnected by the plasmodesmata. It is the inner part of the plasma membrane, which plays a vital role in transporting or free movement of water and other low-molecular-weight solutes such as sugars, amino acids, and other ions in between cells. The term symplastic pathway was proposed by Priestley in the year 1949 when he observed the active and passive movement of water in plants.

The symplast is the inner part of the plant, which is bounded by the plasma membranes. It contains the complete network of the cytoplasm of plant cells that are connected by plasmodesmata. Symplast is considered the living part of the plant tissue without the presence of a cell wall and intercellular spaces in it. The pathway created by the symplast is called symplastic or the symplastic pathway. In this pathway, the water absorbed from the soil is first allowed to enter the cell sap and then allowed to pass from one cell into another cell. In the symplastic pathway, the movement of water is in between the cytoplasm and the vacuoles through the plasma membranes and plasmodesmata and beyond the cortex of plant cells. The pathway is slower when compared to the apoplastic pathway. In this symplastic pathway, water moves from one cell to another cell by osmosis viz. as the water enters into one cell, this cell has a higher water potential than compared to the adjacent cell.

Why is Symplast Considered as the Living Part of the Plant Tissue?

Test your Knowledge on Symplast!
Q5