The absorption of water by the roots of the plants takes place in two ways:

In the active absorption, the water first enters the cell sap and passes from one cell to another. This type of movement where protoplasm is involved is called symplast.

In passive absorption, water moves through the apoplast of the root. The apoplast path includes the cell wall and intercellular spaces.

Apoplast and symplast are two separate pathways in plants that initiate the passage of water along with ions from root hair via root cortex to xylem elements. These routes may exist either simultaneously or separately having different rates.

Let us have a detailed look at apoplast and symplast and the difference between the two. 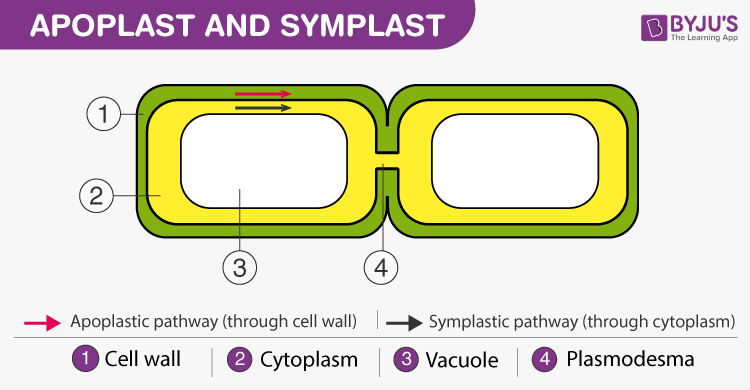 Symplast consists of a cytoplasmic network of every plant cell interconnected by plasmodesmata. Symplast does not involve intercellular spaces and cell walls and is therefore considered as the complete living component of the plant tissue.

Difference between Apoplast and Symplast

The major difference between apoplast and symplast is as follows: 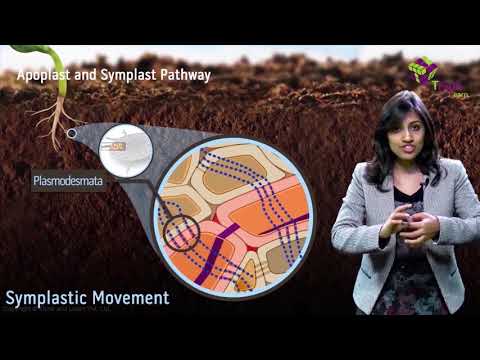 What do you mean by the apoplast pathway?

In the apoplast pathway, the water moves through the adjacent wall of the epidermis and cortex without entering the cytoplasm.

What is an apoplast?

The apoplast is the system of adjacent, continuous cell walls. It refers to the space outside the plasma membrane within which the molecules can freely diffuse.

Is apoplast active or passive absorption?

The apoplast is the passive absorption that takes place through the apoplast of the root that comprises the cell wall and intercellular spaces.

What is the importance of the Casparian strip?

The Casparian strip is a band of waterproof tissue found on the sidewalls of the endodermis of roots. The apoplastic water movement beyond the cortex is blocked by the Casparian strip. It prevents water from entering the pericycle that is important in inducing root pressure.