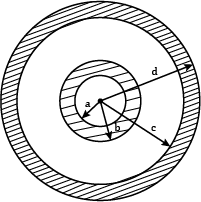 Q. A positive charge 'Q' is placed on a conducting spherical shell with inner radius R1 and outer radius R2. A particle with charge q is placed at the centre of the spherical cavity. The magnitude of the electric field at a point in the cavity, a distance r from center is
Q. A solid metallic sphere has a charge + 3Q. concentric with this sphere is a conducting spherical shell having charge –Q. The radius of the sphere is a and that of the spherical shell is b. (b > a). What is the electric field at a distance R (a < R < b) from the centre.
View More
Explore more
Electric Field
Standard IX Physics
Solve
Textbooks
Question Papers
Install app