(a) If the image formed by a lens is diminished in size and erect, for all positions of the object, what type of lens is it?
(b) Name the point on the lens through which a ray of light passes undeviated.
(c) An object is placed perpendicular to the principal axis of a convex lens of focal length 20 cm. The distance of the object from the lens is 30 cm. Find (i) the position (ii) the magnification and (iii) the nature of the image formed.
OR
(a) One - half of a convex lens is covered with a black paper. Will such a lens produce an image of the complete object? Support your answer with a ray diagram.
(b) An object 5 cm high is held 25 cm away from a converging lens of focal length 10 cm.
(i)Draw the ray diagram and
(ii)Calculate the position and size of the image formed.
(iii) What is the nature of the image?

(a) If the image formed by a lens is diminished in size and erect, for all positions of the object, then the lens is a concave lens.
(b) The point on the lens through which a ray of light passes undeviated is known as Pole.
(c) 1f=1v−1u⇒1v=1f+1u⇒v=u×fu+f;f=20cm, u=−30 cm
(i) V=(−30)×2020−30=60 cm
The image is formed at a distance of 60 cm on the other side of the optical centre
(ii)m=−vu=−60−30=2
(iii) Image formed is inverted.
Or
(a) The image is formed by a large number of rays from the object. So, even if one half of the lens is darkened, the image will form. However, the brightness of the image will be less as compared to that of the image formed without wrapping the lens. 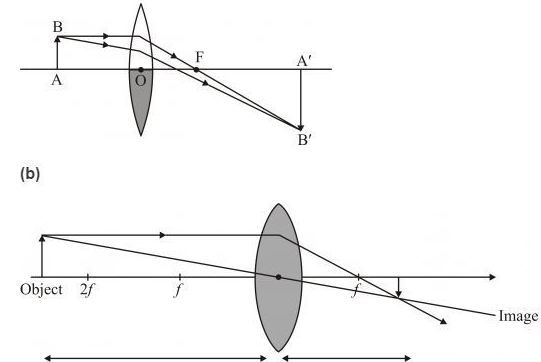