Decreased levels of estrogen can cause which of the following bone-related disorder?

The correct option is A Osteoporosis
Tetany - it is a disorder in which wild contractions or spasms of the muscles take place this occurs due to the low calcium concentration in the body fluid. Voice box, hand and feet are the common part of the body which are affected by this.

Muscular Dystrophy - It is a disease that involves progressive degeneration of skeletal muscle mostly due to genetic disorder. It affects tissues or organs, which increasingly deteriorate over time

Gout- It is an inflammatory disease which causes inflammation of joints. It is caused by the accumulation of uric acid crystals due to defect in purine metabolism. Gout is caused by a condition known as hyperuricemia, where there is too much uric acid in the body. The body makes uric acid when it breaks down purines, which are found in our body and the food we eat. Its main symptoms involve pain, swelling and redness.

Osteoporosis- It is an age-related disorder characterised by decreased bone mass and increased chances of fractures. Decreased levels of estrogen is a common cause. Osteoporosis is a bone disease that occurs when the body loses too much bone, makes too little bone, or both. As a result, bones become weak and may break from a fall or, in serious cases, from minor bumps. In this disease, bone becomes porous. 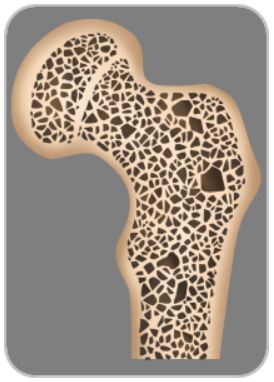 Q. Assertion- An example of age-related disorder characterised by decreased bone mass is osteoporosis
Reason- It is caused due to defect in purine metabolism

Q. Which one of the following is not related with bone disorder?
View More
Explore more
Disorders of the Skeletal System
Standard XIII Biology
Solve
Textbooks
Question Papers
Install app