How does moon form? 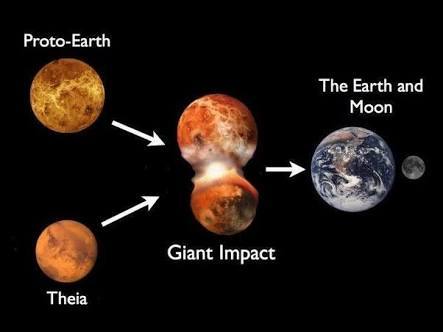 The giant-impact hypothesis, sometimes called the Big Splash, or the Theia Impactsuggests that the Moon formed out of the debris left over from a collision between Earth and an astronomical body the size of Mars, approximately 4.5 billion years ago, in the Hadean eon; about 20 to 100 million years after the solar system coalesced. The colliding body is sometimes called Theia, from the name of the mythical Greek Titanwho was the mother of Selene, the goddess of the Moon. Analysis of lunar rocks, published in a 2016 report, suggests that the impact may have been a direct hit, causing a thorough mixing of both parent bodies.

For video watch this
https://youtu.be/WGTBJHFNywI