The correct options are
A Germany
B Japan
D Italy
Italy saw Benito Mussolini rise to power in 1922. In Spain, General Franco came to power by destroying democracy through a military coup in 1939. The Japanese developed their own version of fascism by conducting military campaigns in China and Korea. Germany under Adolf Hitler became the most well known fascist state the world had ever seen at the time. 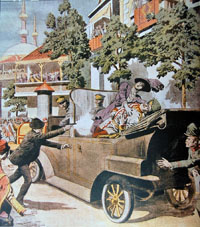 Q. Japan was one of the first countries that signed a peace treaty with India post the World War.
Q. Identify the powers which were defeated during the First World War:
View More
Explore more
What Is Fascism?
Standard X History
Solve
Textbooks
Question Papers
Install app