In the graph of species-area relationships, the value of slope (Z) indicates species richness of the considered area.

Read the following statements related to the value of Z and identify the incorrect statement(s).

The correct option is D Only B
Alexander von Humboldt was a German naturalist and geographer who proposed the species - area relationships of an ecosystem. He observed that within a region, species richness increases with increasing explored area, but up to a certain limit.

The relationship plot between species richness and area gives a rectangular hyperbola. 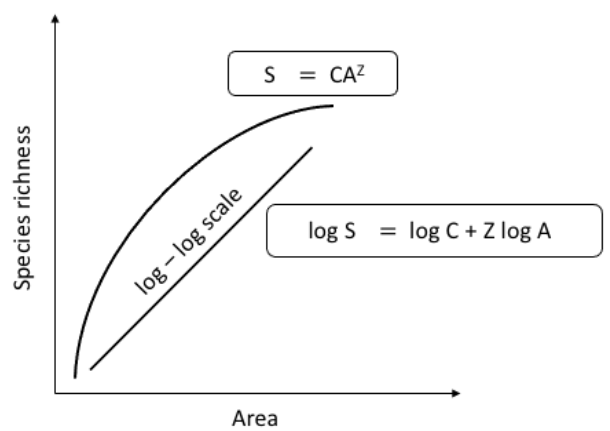 This graph can be represented by the equation,


On logarithmic scale, it can be represented as

Ecologists have found out that the value of the Z ranges between 0.1 and 0.2 irrespective of the taxonomic group or the region. For example, the plants in Britain, birds in California, molluscs in New York state, etc.

However, in larger areas such as entire continents, the slope of the line is much steeper and the Z value ranges between 0.6 to 1.2

For frugivorous (fruit-eating) birds and mammals in the tropical forests, the slope is found to be 1.15

Hence statement B is incorrect.

Suggest Corrections
1
Similar questions
Q. Statement 1: If the species-area relationships are analysed among very large areas like entire continents, the value of Z i.e., the slope of line lies in the range of 0.1 to 0.2