Name the raw materials that are required for the manufacturing process of washing soda by solvay process. Describe the chemical reaction involved in this process

The correct option is
Solvay process feedstocks:-
Salt Brine – Salt brine as one of the feedstock provides salt and water and it can be easily sourced from both inland and the ocean.
Limestone
Ammonia
The Solvay Process for the production of sodium carbonate is summarised in the flowchart below: 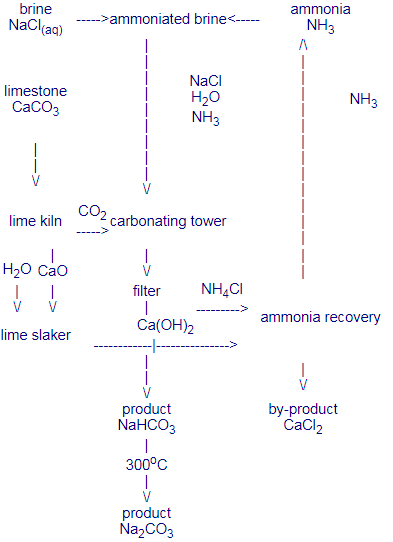 The Solvay process will commence with brine purification which involves
Brine solution is concentrated by evaporation to at least 30 percent
Calcium, magnesium and iron are collected as precipitants in this reaction
Ca2+(aq)+CO32−(aq)→CaCO3(s)
Mg2+(aq)+2OH−(aq)→Mg(OH)2(s)
Fe3+(aq)+3OH−(aq)→Fe(OH)3(s)
Following the precipitation reaction, the brine solution is then filtered and passed through an ammonia tower to dissolve ammonia.
Through this process energy is released because of its exothermic nature, thereby, the ammonia tower will get cooled by this energy.
Ammoniation of brine
In Solvay process second step is the ammoniation of brine solution. Ammonia gas is absorbed in concentrated brine to give a solution containing both sodium chloride and ammonia.
Reactions in kiln / Separation of solid sodium hydrogencarbonate
Lime Kiln
A lime kiln is used to produce quicklime through the calcination of limestone. This reaction takes place at 900∘ C.
Types of kilns
Shaft kilns
Counter current shaft kilns
Regenerative kilns
Annular kilns
Rotary kilns
Kilns are fed with a limestone/coke mixture (13:1 by mass). The coke burns in a counter-current of pre-heated air
C(s)+O2(g)→CO2(g)
The heat of combustion raises the temperature of the kiln and the limestone decomposes
CaCO3(s)↔CaO(s)+CO2(g)
The gas, containing approximately 40 per cent carbon dioxide, is freed of lime dust and sent to the carbonating (Solvay) towers. The residue, calcium oxide, is used in ammonia recovery.
Reactions in solvay tower
The Solvay Tower is tall and contains a set of mushroom-shaped baffles to slow down and break up the liquid flow so that the carbon dioxide can be efficiently absorbed by the solution. Carbon dioxide, on dissolving, reacts with the dissolved ammonia to form ammonium hydrogen carbonate
NH3(aq)+H2O(l)+CO2(g)→NaHCO3(s)
The solution now contains ions Na+(aq), Cl-(aq), NH4+(aq) and HCO3−(aq). Of the four substances which could be formed by different combinations of these ions, sodium hydrogencarbonate (NaHCO3) is the least soluble. It precipitates as a solid in the lower part of the tower, which is cooled.
NaCl(aq)+NH3(aq)+H2O(I)+CO2(g)→NaHCO3(s)+NaCl(aq)
Formation of sodium carbonate
Suspended sodium hydrogen carbonate is removed from the carbonating tower and heated at 300oC to produce sodium carbonate:
2NaHCO3(s)→Na2CO3(s)+H2O(g)+CO2(g)
Ammonia Recovery
CaO is formed as a by-product of the thermal decomposition of limestone in the lime kiln.
This CaO enters a lime slaker to react with water to form calcium hydroxide:
CaO(s)+H2O(l)→Ca(OH)2(aq)
The calcium hydroxide produced here is reacted with the ammonium chloride separated out of the carbonating tower by filtration:
Ca(OH)2(aq)+2NH4Cl(aq)→CaCl2(aq)+2H2O(l)+2NH3(g)

What is the chemical name of washing soda? Name three raw materials used in making washing soda by Solvay process.