Shortcut for balancing the equation.

Easiest method for balancing the equation

If any of the Images provided Looks Unclear to you.Please download the image(By right clicking and save as in the case of computer and Press and Hold and Download In the Case of Mobiles).This is true Best Possible Explanation Like if Understood

A balanced chemical equation tells you the amounts of reactants and products needed to satisfy the Law of Conservation of Mass. Basically, this means there are the same numbers of each type of atoms on the left side of the equation as there are on the right side of the equation. It sounds like it should be simple to balance equations, but it's a skill that takes practice. So, while you might feel like a dummy, you're not! Here's the process you follow, step by step, to balance equations. You can apply these same steps to balance any unbalanced chemical equation... This is the unbalanced chemical equation for the reaction between iron and oxygen to produce iron oxide or rust.

The first step is to write down the unbalanced chemical equation. If you're lucky, this will be given to you. If you're told to balance a chemical equation and only given the names of the products and reactants, you'll need to either look them up or apply rules of naming compounds to determine their formulas.

Let's practice using a reaction from real life, the rusting of iron in air. To write the reaction, you need to identify the reactants (iron and oxygen) and the products (rust). Next, write the unbalanced chemical equation:


Write Down Number of Atoms In an unbalanced equation, there is a different number of atoms on each side of the reaction.

The next step for balancing the chemical equation is to determine how many atoms of each element are present on each side of the arrow:

On the reactant side:

On the product side:

How do you know the equation isn't already balanced? Because the number of atoms on each side isn't the same! Conservation of Mass states mass isn't created or destroyed in a chemical reaction, so you need to add coefficients in front of the chemical formulas to adjust the number of atoms so they will be the same on both sides.

Add Coefficients To Balance Mass in a Chemical Equation This chemical is balanced for iron atoms, but not for oxygen atoms. The coefficient is shown in red.

When balancing equations, you never change subscripts. You add coefficients. Coefficients are whole number multipliers. If, for example, you write 2 H2O, that means you have 2 times the number of atoms in each water molecule, which would be 4 hydrogen atoms and 2 oxygen atoms. As with subscripts, you don't write the coefficient of "1", so if you don't see a coefficient, it means there is one molecule.

There is a strategy that will help you balance equations more quickly. It is called balancing by inspection. Basically, you look at how many atoms you have on each side of the equation and add coefficients to the molecules to balance out the number of atoms.

Iron is present in one reactant and one product, so balance its atoms first. There is one atom of iron on the left and two on the right, so you might think putting 2 Fe on the left would work. While that would balance iron, you already know you're going to have to adjust oxygen, too, because it isn't balanced. By inspection (i.e., looking at it), you know you have to discard a coefficient of 2 for some higher number.

3 Fe doesn't work on the left because you can't put a coefficient in from of Fe2O3 that would balance it.

4 Fe works, if you then add a coefficient of 2 in front of the rust (iron oxide) molecule, making it 2 Fe2O3. This gives you:

Iron is balanced, with 4 atoms of iron on each side of the equation. Next you need to balance oxygen. This is the balanced equation for the rusting of iron. Note there is the same number of reactant atoms as product atoms. Todd Helmenstine

This is the equation balanced for iron:

When balancing chemical equations, the last step is to add coefficients to oxygen and hydrogen atoms. The reason is because they usually appear in multiple reactants and products, so if you tackle them first you're usually making extra work for yourself.

Now, look at the equation (use inspection) to see which coefficient will work to balance oxygen. If you put a 2 in from of O2, that will give you 4 atoms of oxygen, but you have 6 atoms of oxygen in the product (coefficient of 2 multiplied by subscript of 3). So, 2 does not work.

However, chemists always write the simplest equation, so check your work to make sure you can't reduce your coefficients.

This is how you balance a simple chemical equation for mass. You may also need to balance equations for both mass and charge. Also, you may need to indicate the state (solid, aqueous, gas) of reactants and products.


Here is a small worksheet for you to get into this. Answer is also provided 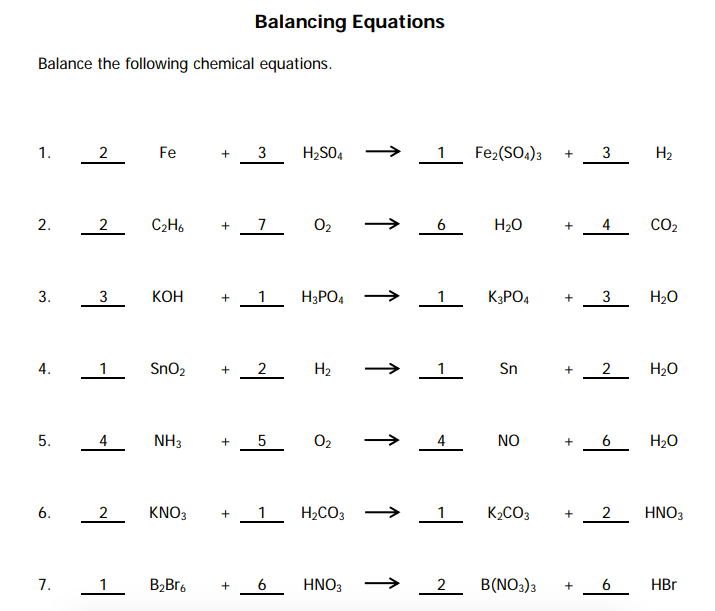