Two blocks of masses m1=10 kg and m2=5 kg connected to each other by a massless inextensible string of length 0.3 m are placed along a diameter of a turn table. The coefficient of static friction between the table and block m1 is μ=0.5 while there is no friction between block m2 and the table. The table is rotating with an angular speed of 10 rad/s about a vertical axis passing through its centre O. The masses are placed along the diameter of turn table on either side of the centre O such that the mass m1 is at a distance of 0.124 m from O. The masses are observed to be rotating with the turn table without slipping. Calculate the frictional force acting on block m1.

Since masses m1 and m2 are rotating with the turn table without slipping, static friction (f) will be acting to support the tension acting on mass m1 to avoid the slipping.
i.e Tension T and friction f will be directed towards centre of circular path to provide necessary centripetal force. 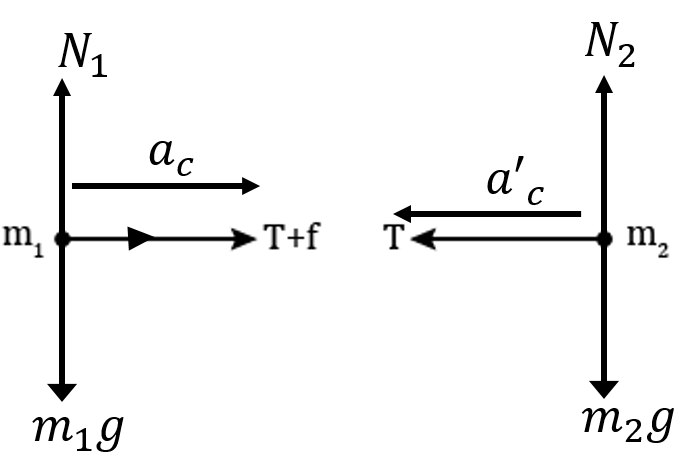 All the vertical forces are balanced due to equilibrium in vertical direction.
Along radial direction:
For block m2:
T=m2ω2r2 ... (i)

Therefore, frictional force on m1 is 36 N towards centre of turn table.