A glass tumbler containing hot water is kept in the freezer compartment of a refrigerator (temperature < 0°C). If you could measure the temperature of the content of the tumbler, which of the following graphs (Fig.) would correctly represent the change in its temperature as a function of time. 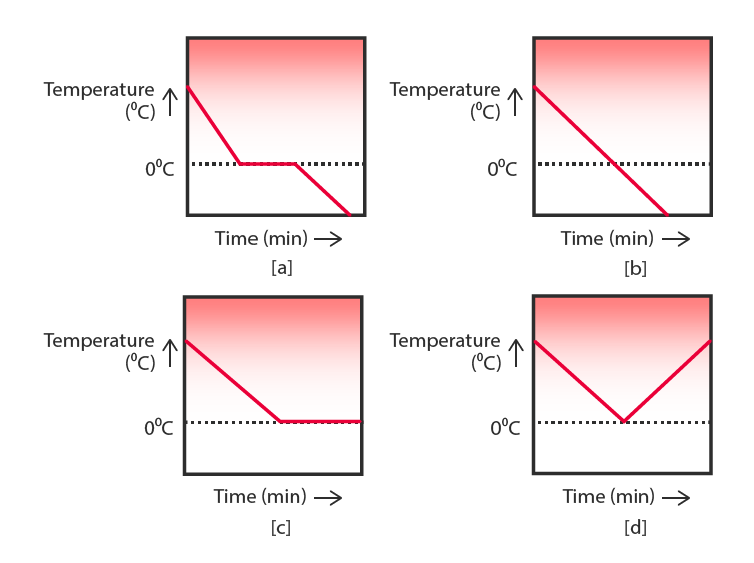 Graph (a) is the right answer because water will cool initially until its temperature reaches 0 °C. After reaching the freezing point (0 °C) temperature will remain constant until the water becomes ice. After that point temperature would decrease again.

Write a note on plumbosolvency The critical temperature of a gas is the temperature: (A) above which it can no longer remain in the... Name the noble gas with 3 shells During the electrolysis of molten lead bromide which of the following takes place? (A) Bromine is re... The species which by definition has zero standard molar enthalpy of formation at 298 K is : (A) Br2(... The mass of one helium atom is (A) 2 amu (B) 3 amu (C) 4 amu (D) 8 amu Diamond is hard because (A) all the four valence electrons are bonded to carbon atoms by covalent b... Peroxy linkage is present in (A) H2SO5 (B) H2SO3 (C) H2SO4 (D) H2S2O7 On mixing a certain alkane with chlorine and irradiating it with ultraviolet light it forms only one... 29.5 mg of an organic compound containing nitrogen was digested according to Kjeldahl’s method...