Boojho planned activity to observe an object A through pipes as shown in Fig., so that he could see objects which he could not directly see. (a) How many mirrors should he use to see the objects? (b) Indicate the positions of the mirrors in the figure. (c) What must be the angle with respect to the incident light at which he should place the mirrors? (d) Indicate the direction of the rays in the figure. (e) If any of the mirrors are removed, will he be able to see the objects? 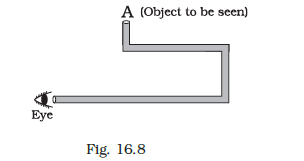 a) Three mirrors should he use to see the objects. 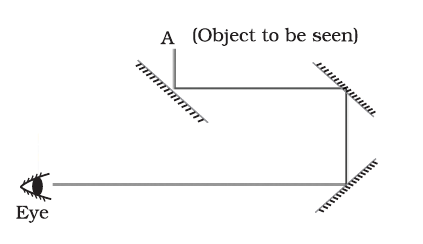 c) Mirrors should be placed at an angle of 45° with respect to the incident light. So, that the rays can move forward.
d) Direction of rays is shown in figure. 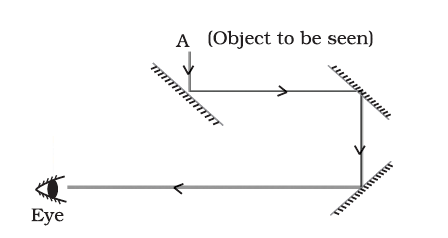 e) If any of the mirrors are removed, he will be unable to see the objects since the reflected rays will not be able to continue forward for further reflection to reach our eyes.

An Equilateral Prism Deviates A Ray Through 45 Degree For The Two Angles Of Incidence Differing by 2... What Is Magnetic Moment Of A Bar Magnet? If Magnetic Monopoles Would Have Existed. How Would Gauss’ law of magnetism be modified? Express Dielectric Constant Of A Medium In Terms Of Capacitance What Is Its SI Unit. A Particle Moves With Constant Speed V Along A Circular Path Of Radius R And Completes The Circle In... A Car Travels 15 M In 3 S And Then Another 15 M In 2 S. What Is The Average Speed Of The Car? A Uniform Wire Of Resistance 50omega Is Cut Into 5 Equal Parts. These Parts Are Now Connected In Par... The Natural Frequency Of An Lc – Circuit Is 1,25,000 Cycles Per Second. Then The Capacitor C I... What Happens, When A Magnetic Substance Is Heated? (A) Remains The Same. (B) It Loses Its Magnetism.... An Aeroplane Is Flying Horizontally At A Height Of 490m With A Velocity Of 150ms −1. A Bag Contain...