The Arabs popularised the use of  in mathematics.

The correct option is A Zero
Arabs spread the Indian numeral system in Europe and popularised the use of ‘Zero’ in mathematics, a numeral that wasn’t used in European countries before. The numeral system that we use today that includes the digits zero to nine is called the Hindu-Arabic numerals. Hindus of India invented these numerals and Arabs popularised them throughout the world. Hence we call them as Hindu- Arabic numerals.

Similar questions
Economics
Q1.
Select the incorrect one/ones from the given list of items using the code  given below :
1. 'Narrow Money' and 'Broad Money' are categories of money stocks popularised by the banking industry in India.
2. In 'Narrow Banking' commercial banks are basically doing 'retail banking'.
View More...

People also searched for
Legal Studies
Q1.
The Parliament of India consists of ___________________.
Physics
Q2.
In the figure above, Calculate the torque about the pendulum suspension point produced by the weight of the bob, given that the mass is 40 cm below the suspension point, measured vertically, and m = 0.50 kg. 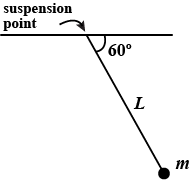