What are dipole dipole forces?

As the name implies, dipole-dipole forces are those between dipoles when they are very close together or touching one another. The δ- end of one polar molecule is attracted to the δ+ end of another drawing them together. Depending on the orientation of the dipoles the forces can be either attractive or repulsive but the more stable and more likely arrangement will maximize the attractive interactions. 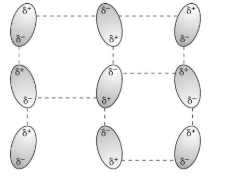 Only molecules that possess permanent dipoles like H2O or HCl can engage in dipole-dipole interactions, non-polar molecules like CO2, CCl4 cannot.